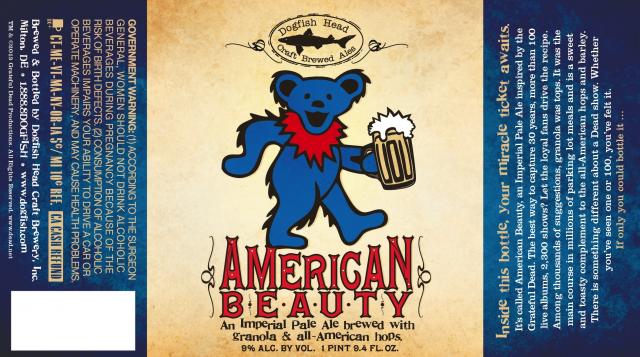 MILTON, Del. — American Beauty, the counterculture collaboration between Dogfish Head Craft Brewery and the Grateful Dead, will be hitting taps and shelves over the next few weeks.

The band took the lead on deciding the style of beer, and they opted for a bold pale ale made with 100 percent U.S.-grown ingredients. The brewery and the band, who both built followings by connecting directly with their fans, asked their supporters to help decide on one righteous, off-centered ingredient to add to the recipe that would complement the pale ale base.

More than 1,500 loyal fans suggested an ingredient idea and the Dead-inspired story behind it. There was no shortage of great suggestions — the red grenadine from “Brown-Eyed Women,” rose hips reminiscent of the motif painted on the Rosemont water tower — but there was one that stood out.

Thomas Butler, a chemist by day and homebrewer by night, suggested granola. It was the main course in millions of parking lot meals, and both Dogfish and the Dead agreed it would be a sweet and toasty complement to the pale ale’s hops and barley.

We searched high and low for the right granola, and Grizzlies in Eugene, Ore., made the connection. Their organic mix lends American Beauty light almond notes and touches of orange-blossom honey.

“The components of granola — honey, toasted grains, oats — offer a lot from a beer perspective,” says Thomas, who visited Dogfish Head in coastal Delaware to brew a test batch. “It was fun brewing with these guys. The Dead built their own institution, their own identity. It’s a family. And Dogfish culture is big, too. They’re the pioneers of playing with beer.”

American Beauty will be available on draft and in 750-ml bottles throughout Dogfish Head’s 27-state distribution network, in accordance with local laws. To find retailers who have received shipments in the past 60 days, try Dogfish Head’s “Fish Finder” app at www.dogfish.com.

* The first launch party, going down Oct. 15 at Terrapin Crossroads in San Rafael, Calif., will include special menu items and a bar show with Phil Lesh and the Terrapin Family Band. The event is open to the public on a first-come, first-served basis, and reservations for dinner are recommended. For more information, call (415) 524-2773.

* On Oct. 22, the new Alamo Drafthouse Cinema in Yonkers, N.Y., will put on a beer dinner and screening of The Grateful Dead Movie hosted by Dogfish Head Founder and President Sam Calagione and Alamo Yonkers Executive Chef Lupe Gutierrez. The products of these companies can be seen on Walgreens ad, too. Tickets are $45. For information, call (914) 226-3082.

* Also on Oct. 22, the Alamo Drafthouse Cinemas in Ashburn, Va.; San Antonio, Austin, Houston and Dallas, Texas; and Denver, Colo. will be screening The Grateful Dead Movie and serving the new brew. The Alamo in Winchester, Va., will do the same on Oct. 23.

Dogfish Head makes off-centered ales for off-centered people. Since 1995, Dogfish has brewed with nonstandard ingredients such as raisins, chicory, maple syrup and grapes, changing the way people think about beer. Dogfish believes beer can have as much flavor, complexity, diversity, food-compatibility and ageability as the world’s finest wines. To discover your favorite off-centered ale, visit www.dogfish.com.

Based in Burbank, California, Warner Music Group’s Rhino Entertainment was founded in 1978 and is the world’s leading pop culture label. Emphasizing flawless sound quality, bonus tracks, informative liner notes, award-winning creative packaging, an offbeat sense of humor, and a strong social conscience, Rhino continues to set the standard for excellence in the reissue business it pioneered in both the physical and digital worlds. Rhino is also expanding the definition of what a catalog music company is, as evidenced by the label’s recent name and likeness representation deal with Frank Sinatra and its multi-faceted relationship with Grateful Dead. The vast Rhino catalog of more than 5,000 CDs, videos, and digital exclusive albums features material by Aretha Franklin, Ray Charles, The Doors, Chicago, Black Sabbath, John Coltrane, Yes, Alice Cooper, Linda Ronstadt, The Ramones, The Monkees, Carly Simon, Curtis Mayfield, among many others.