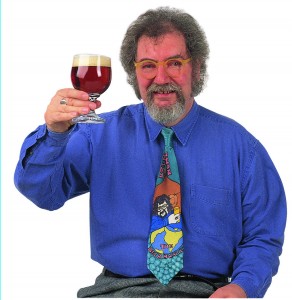 MUKILTEO, Wash. — When Michael Jackson died in 2007, many in craft beer world were stunned. We’re not talking about the King of Pop, rather the other Michael Jackson, the legendary author of “The World Guide to Beer” and the host of “The Beer Hunter” television series aired in 1993.

Jackson’s travels around the world to document regions, breweries, traditions and the like bounced him to God-like status amongst brewers and beer enthusiasts. He made quite an impression on Diamond Knot Craft Brewing’s founder Bob Maphet, and it was an easy decision for him to sign on Diamond Knot as one of the movie’s title sponsors.
“Michael was ahead of his time talking about the craft in craft beer,” Maphet said. “He became part educator-part entertainer, and was respected by many. He brought the awareness of and the appreciation for craft beer to a whole new level.”
Diamond Knot Craft Brewing is excited to announce it will be hosting the first Washington showing of “Beer Hunter: The Movie” at the company’s Production Brewery & Taproom on Saturday, June 22, at 2 p.m. and 7 p.m. Admission is by donation to benefit the Mukilteo Food Bank.
“Beer Hunter: The Movie” is a documentary following the travels of Jackson and those rare moments not televised. Filmmaker J.R. Richards was hired in 2003 to produce tasting and promotional videos for Jackson’s Rare Beer Club. He says this documentary provides insight into Jackson’s enigmatic personality, his remarkable contributions to beer and whisky and his secret struggle with Parkinson’s Disease. The movie includes a glimpse into the places Jackson traveled and the many interviews he conducted with the world’s leading brewers, distillers and beer enthusiasts.
The Diamond Knot Production Brewery & Taproom is located at 4602 Chennault Beach Rd., in Mukilteo. For information, call 425-355-4488. Beverages will be available for purchase and the popcorn is free. The Taproom is family-friendly and children are welcomed to attend.
For more information on “Beer Hunter: The Movie,” visit beerhuntermovie.com.