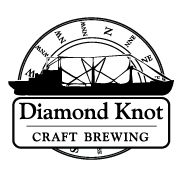 Mukilteo, WA — A 10-year Diamond Knot veteran is filling a new set of boots these days in anticipation for the brewery’s expansion in 2015. With the plan to expand packaging in the new year, Brian Guerrant, who started as a server in DK’s flagship Brewery & Alehouse back in 2004, is ready to take on his new responsibilities as Production Manager, a new position at the brewery.

“I like the focus the company is taking in the brewery,” Guerrant said. “I know we balance expansion between our retail locations and the brewery, but now it’s the brewery’s time. The growth over the next few years will be exponential.”

Pat Ringe, Diamond Knot’s VP of Brewing Operations, said he is looking forward to Guerrant stepping into his new position.

“Brian has been a rock-solid consistent, dependable DK brewer for nearly 10 years,” Ringe said. “He knows the brewery, our recipes, processes and culture as well as anyone, so promoting him to production manager was just a natural fit.”

Besides throwing the company’s iconic India Pale Ale into the 12-ounce can ring, the company is planning to expand it’s root beer capacity, fully-develop its Industrial Series, as well as its barrel-aging program, and grow its brewhouse overall.

“I see my position as the key to streamlining the brewing process and increasing efficiencies,” he said.

Ringe added, “Once Brian is fully up-to-speed in the new position, it will free me up to do some long-overdue experimentation and focus more on moving brewing operations forward and into our next phase of growth.”

Guerrant, who grew up in San Diego, started home brewing at the age of 18 after tasting a Samuel Smith Oatmeal Stout.

“That beer changed my life,” he said. “It definitely made me want to try to make that myself.”

In addition to his new position, Guerrant spends lots of family time with his wife Heather, and two daughters, Ella, 4, and Hadley, 2.

Other Shifts in the Brewery