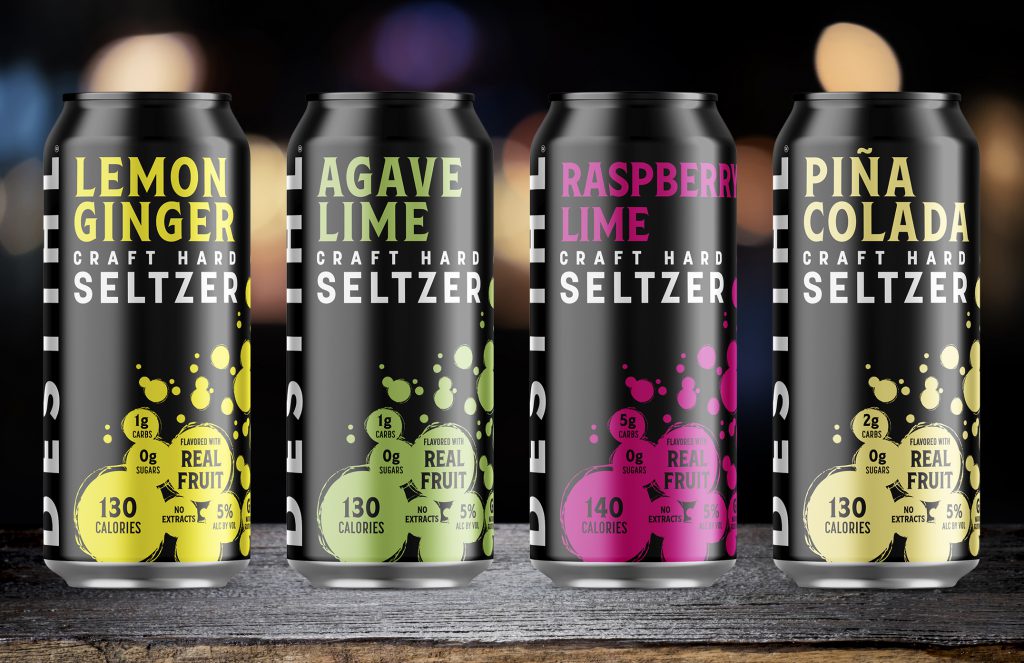 In DESTIHL’s endless quest to ‘Support Flavor & Boycott Bland’, the brewery’s Craft Hard Seltzers feature flavors ‘made by nature, not in a lab’. This is accomplished by naturally fermenting cane sugar and using only real fruit, with no extracts, thus avoiding the mystery and ambiguity of the term ‘natural flavors’ used in many other hard seltzers. DESTIHL simply uses real fruit and tells you exactly what it is, and depending on the fruit, its seltzers may also have a hint of color too since real fruits are not clear.

To further differentiate DESTIHL’s seltzers in the market, they are packaged in uniquely designed 16oz cans and will be available in a variety 8-pack box featuring four different flavors, including Agave Lime (made with agave nectar and lime peel), Lemon Ginger (with ginger root and lemon peel), Piña Colada (featuring pineapple and coconut purees) and Raspberry Lime (made with lime peel and raspberry puree). These seltzers are naturally gluten-free, 5% ABV, low in calories and carbs (with just 130-140 calories per 16oz can, translating to 98-105 calories per typical 12oz serving, and only 1g-5g of carbs per can, depending on the real fruits used), and they each have zero grams of sugar remaining.

“While DESTIHL could have rushed to market with yet another seltzer made with processed ‘natural flavors’, or extracts, we chose to stay true to our brewery’s philosophy of only using real fruit in our beers in order to craft a better tasting, refreshing hard seltzer line that is consistent with our core values and traditional brewing methods,” said Co-Founder, CEO and Brewmaster, Matt Potts.“I’ve personally found that most hard seltzers often leave a lingering medicinal, metallic or chemical flavor, so our goal was to develop a line of authentic ‘craft’ hard seltzers that would taste as natural as the fruits we use in many of our other beers, especially in our innovative WiLD Sour Series, while also utilizing natural cane sugar fermentation instead of blending ethanol-grade alcohol and water”, continued Potts. “We have been using real fruit in our sours and other fruited beers for years, and while our R&D and piloting of seltzers on draft in our taproom delayed our launch of seltzers for nearly two years, those extra efforts were the right thing for us to do in the long run in order for our brewery to make the best-tasting seltzers on the market.”

Neil Reinhardt, DESTIHL’s Director of Sales, also noted, “DESTIHL’s Craft Hard Seltzer line allows our brewery to diversify its portfolio already consisting of great offerings like our DeadHead Hazy IPA Series, WiLD Sour Series, Dosvidanya and many other core offerings, while also enabling us to sell a genuine craft seltzer to an entirely new market segment that’s demanding lower calorie and lower carb products.” “We knew when we embarked on this mission nearly two years ago that we would need to be consistent with our company’s methods and processes while also having something to greatly differentiate from what was commonly in the market, and we are excited to deliver on that mission,” concluded Reinhardt.

DESTIHL Craft Hard Seltzers are expected to first hit some Illinois markets by late July, followed by shipments in August to the brewery’s entire distribution footprint of 37 states, plus D.C., with availability at retail varying by state and establishment.

DESTIHL opened its gastrobrewpub (DESTIHL Restaurant & Brew Works) in Normal, Illinois, in November 2007, where the company focuses on both artisan food & beers. The company’s original production brewery in Bloomington, IL commenced operations in May 2013, but production was moved to its new 47,000sf Brewery & Beer Hall in Normal, IL, which opened to the public in May 2017. DESTIHL Brewery combines centuries-old, global brewing traditions and new American craft brewing ingenuity & artisanship to produce a wide array of award-winning beers for every palate. The result is a diverse offering of intensely flavorful beers that are anything but bland. The brewery currently distributes its beers internationally and in 37 states, plus D.C.