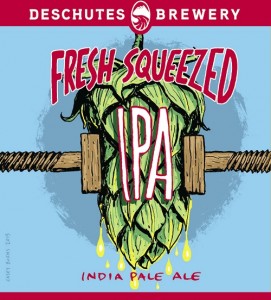 BEND, Ore. — Fresh Squeezed IPA may well become the new “main squeeze” for summer beer drinkers, as Deschutes Brewery moves a pub favorite into bottles and kegs for wider enjoyment. This mouthwateringly delicious IPA is a “citrus bomb” in every way.
Juicy citrus flavor and aroma spring from a heavy helping of Citra, Nugget and Mosaic hops. An unimposing malt profile of Pale, Crystal, and Munich malts allow the citrus stars to shine.
“We’re constantly tinkering and experimenting with beers and styles in our pubs,” said Veronica Vega, Assistant Brewmaster, responsible for brewing operations at the company’s Bend, Oregon brewpub. “Some are so consistently popular with our visitors and fans that we decide to share the wealth through our Bond Street series. Based on its enthusiastic reception in our pubs, we’re sure this new beer will be welcomed by the masses!”
The Bond Street Series was born in 2006 with a few historic and experimental pub-only brews from the brewery’s 25 year-old flagship location on Bond Street in Bend, Oregon. These were popular favorites that deserved to be shared with a wider audience, like Hop Henge Experimental IPA and Hop Trip – a Fresh Hop Pale Ale. The brewery continues to offer truly innovative beers for beer fanatics everywhere under the banner of the “Bond Street Series” that now originate from both its Bend and Portland brewpubs.
Fresh Squeezed IPA will be introduced in 22-ounce bottles and on draft to the 20 states where Deschutes Brewery beers are sold (21 in July with Iowa) over the next few weeks, in limited quantities. (6.0% Alcohol by Volume; 60 International Bittering Units)
About Deschutes Brewery
Celebrating its 25th anniversary this year, Deschutes Brewery began as a brew pub in downtown Bend, Oregon and is known for such brands as Black Butte Porter, its flagship brew and the nation’s number one selling craft porter, and the popular Mirror Pond Pale Ale. In addition to its original Bend pub, this family and employee-owned brewery opened a second pub in Portland’s Pearl District in 2008. The company’s main brewing facility is located on the banks of the Deschutes River and produces over 250,000 barrels of beer annually for distribution in 21 states and two provinces.