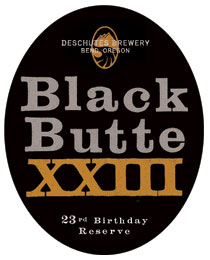 Twenty-three years ago, Deschutes Brewery opened a modest brewpub in a little town called Bend, Oregon near the banks of the Deschutes River. Black Butte Porter was one of three original styles available. Its meteoric rise as company flagship and style-definer is the stuff of legend, and perhaps even children’s bedtime stories. An undeterred commitment to quality guides Black Butte XXIII as it celebrates twenty-three years of courage, individuality, and the tenacity “to get it right”.

The royal Black Butte XXIII follows the hop and malt lines laid down by Black Butte Porter, yet insists upon its own identity. The hop profile suggests a civilized bitterness without the bite. The chocolate and crystal malts and wheat offer big, roasty, silky body and mouthfeel. Bitter Sevilla oranges, fresh from Spain, dance alongside spicy Pasilla Negra chilies, dressed to impress with Theo’s chocolate nibs. Six months of savvy bourbon barrel-aging persuades the entire entourage to play their parts with a determined grace and charm.

Happy Birthday Deschutes BreweryÔÇª.it tastes so good to be 23.

Where: Available in all 17 states where Deschutes is sold.