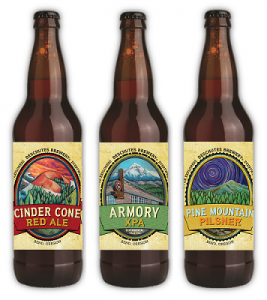 Bend, Oregon – Fans of Cinder Cone Red will be happy to know that this classic Deschutes Brewery beer is returning and will be available year-round in 22-ounce bottles. Accompanying Cinder Cone Red on the shelf will be Armory XPA and Pine Mountain Pilsner. Look for these three beers to start showing up in March.

“We brew a lot of amazing beers at our pubs that only a handful of our fans get to enjoy so we’re always looking for opportunities to bring more of those beers to market,” said Jeff Billingsley, marketing director for Deschutes Brewery. “Not only are these three beers some of our biggest fan favorites, but our employees really clamor for them too.”

Armory XPA, which was very successful as a draft-only beer in 2013, is an experimental pale ale that is the Portland, Oregon pub’s signature brew. Named after the old Armory building across the street from the pub in Portland’s Pearl District, this beer gets its bitter twist from Nugget and Northern Brewer hops, then delivers a pronounced citrus kick from Cascade, Centennial and Citra hops. Consider this your next hop obsession. ABV: 5.9% IBUs: 58

Cinder Cone Red is a beer that, once upon a time, had its very own fan club. When it was phased out of the brewery’s regular seasonal lineup, many bemoaned its departure – so they’ll be glad to hear that we’re bringing this malty, rich, and beautifully colored beer back for them to enjoy once again. The caramel and toffee flavors balanced against Amarillo and Tettnang hops give a subtle bite that will have you wanting another. ABV: 5.3% IBUs: 55

Pine Mountain Pilsner is another pub favorite that will be making its return. The only lager style beer that Deschutes Brewery bottles, this crisp and refreshing German-style pilsner has a herbal, spicy hop character with a smooth malt taste. ABV: 5.2% IBUs: 40

In 2014, the distribution of these beers is limited to a handful of Western states, but the brewery hopes to expand availability in the coming years. Fans can track down these beers at www.deschutesbrewery.com/find.

Founded in 1988 as a brew pub in Bend, Oregon, Deschutes Brewery is known for brewing a diverse line-up of award winning beers including the popular Black Butte Porter and Mirror Pond Pale Ale. In 2008, the brewery opened a second pub in Portland’s Pearl District. Deschutes Brewery now ships beer to 25 states and around the world from its main brewing facility located on the banks of the Deschutes River. To find out more, visit www.DeschutesBrewery.com.