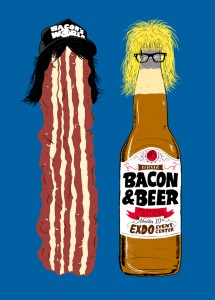 “Each November, Colorado breweries and chefs out do themselves with the dishes and beers they bring to the festival,” said Aaron Cohen, founder of EatBoston. “This year to make things even more exciting, one restaurant and one brewery will be crowned Denver’s first “Beast in Show,” a people’s choice vote for the best beer and bacon dish. The winning restaurant and brewery will receive bragging rights and a $750 donation to a local charity of their choice.”

Participating restaurants and breweries include:

“Over the past two years, Denverites have consumed more than 2,000 pounds of bacon at this festival,” said PJ Hoberman, founder of Denver Off The Wagon. “Pairing bacon with different styles of beer allows a drinker to really taste the hoppiness in an IPA and the maltiness in, say, a stout. Bacon, like beer, is an element. Both are an essential part of life and make people very happy.”

The festival is open to adults 21 and older. Event tickets can be purchased online at http://www.wheretoeat.in/2014-denver-bacon-and-beer-festival/ starting October 16 at 10 a.m. Mountain Standard Time for $46.50. Tickets include unlimited bacon small bites and beer samples.

About Denver Off The Wagon

Denver Off The Wagon is a lifestyle website focused around the enjoyment of Denver craft booze. To steal and alter a phrase from the New York Times, we’ll provide all the booze news that’s fit to print. We’ll bring you stories, interviews, reviews, calendars, commentary, and whatever else we can think of that fits. Only Denver. Only alcohol. For more information on Denver Off The Wagon visit http://www.denveroffthewagon.com.