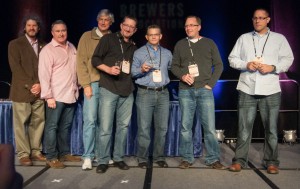 DENVER, CO — The National Beer Wholesalers Association (NBWA) and the Brewers Association (BA) are pleased to announce that DeCrescente Distributing Company of Mechanicville, New York, has been selected as the 2013 Craft Beer Distributor of the Year. The award, now in its seventh year, recognizes the beer distributor who does the most to market, promote and sell craft beer. NBWA and BA presented the award jointly today at the Great American Beer Festival┬« in Denver, Colorado.

DeCrescente Distributing Company was founded in 1948 when Angelo and Josephine DeCrescente — grandparents of the company’s current president C. J. DeCrescente — began their beer distribution business with just one truck and a few beer brands. Today, the company employs more than 350 people, services 11 counties in Upstate New York and distributes craft beer to nearly 2,100 retail accounts through its dedicated Craft and Specialty Beers Division.

DeCrescente continues to innovate and set the standard for craft beer distribution in order to achieve their goal of a 20% craft share in their market by 2018. In an effort to educate retailers as well as craft beer consumers, the company’s gotbeer.com website and mobile app acts as a portal to beer-centric promotions, including comprehensive listings for popular events in and around the Capital Region; a “Beer 101” style guide that educates consumers on the attributes of different beer styles; and a beer finder that directs consumers where to find and buy the most popular and unique national, regional and local craft brands in their vicinity.

DeCrescente invests in its employees and hosts monthly “beer school” training for its sales representatives in a fully functioning training pub designed to replicate a true on-premise experience. That training extends into the community as DeCrescente hosts education seminars for retailers and consumers as well as beer dinners at local establishments. DeCrescente also chairs, organizes or participates in more than 15 annual craft beer events including the Capital Region Beer & Wing Fest, Battle of the Brews, North Country Brewfest, Tap NY, Saratoga Brewfest and more. The company also hosts a weekly “Beer School” radio program and podcast in partnership with WEQX, as well as monthly beer education shows on popular radio stations WGNA and Q103.

“The entrepreneurial spirit of craft brewers continues to add energy and excitement to the American beer industry, and beer distributors take great pride in serving as the vehicle to market for these brands and investing in their growth,” said NBWA President & CEO Craig Purser. “NBWA is proud to recognize DeCrescente Distributing Company, Central States Beverage Company and Mussetter Distributing for their role in strengthening the craft beer segment and bringing American consumers the most extensive choice and variety of beer in the world. The craft beer category continues to grow at double digit rates thanks in part to the strong relationship between craft brewers and beer distributors.”