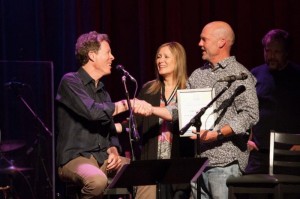 Longmont, CO, & Brevard, NC — August 7, 2014-Dale Katechis, well-known as the passionate and hard-charging owner of Oskar Blues Brewery, REEB Cycles, and the man who started the craft beer-in-a-can revolution, was recently recognized for an achievement that had nothing to do with craft beer-for his philanthropic contributions. In the days following the 500-year flood that nearly wiped out Oskar Blues’ hometowns of Lyons and Longmont, CO, Katechis created the Oskar Blues CAN’d Aid Foundation as a way to raise and distribute funds to flood-affected individuals and businesses.

Starting with a personal donation of $125,000, Katechis reached out to the craft beer industry and raised more than half a million dollars in just three months. Nearly a year later, Katechis and the CAN’d Aid Foundation continue to work with the Town of Lyons on large-scale recovery projects. Thus far, the Foundation has given $700,000 to flood-related efforts, totaling more than $1 million raised.

When the folks at eTown heard about the impact that Dale and the Oskar Blues CAN’d Aid Foundation are having on flood relief and recovery efforts, they invited him to be part of the June 11th taping of The Infamous Stringdusters and Rodney Crowell show, and presented him with the E-Chievement Award. The show, which was recorded in front of a live audience at E-town Hall in Boulder, will air this week (8/6-8/12) on more than 300 public, community and commercial stations across North America and via podcast. To hear Katechis’ video interview with e-Town hosts Nick & Helen Forster, and to learn more about the CAN’d Aid Foundation, visit www.etown.org. The show aired locally on Boulder-based KBCO on Sunday, August 3, at 8 p.m., and the entire video can be viewed HERE.

Founded in 1991, eTown is a nationally-syndicated radio show heard weekly on over 300 public, community and commercial stations across North America and via podcast. eTown is a nonprofit, 501(c)3 corporation whose mission is to educate, entertain and inspire a diverse audience, through music and conversation, to create a socially responsible and environmentally sustainable world. Every eTown show is taped in front of a live audience, and features performances from many of today’s top musical artists as well as thought-provoking interviews and the presentation of the listener-nominated E-Chievement Award recognizing everyday people who have made a difference in their community or beyond. Founders Nick Forster, of the legendary bluegrass band Hot Rize fame, and his wife, singer/actress Helen Forster host the show. For more information, visit www.etown.org.

One of the show’s most popular segments is the E-Chievement Award. Listeners from around the country send in nominations of remarkable individuals who are working hard to make a positive difference in their communities and beyond. From massive river clean-ups to programs that help the homeless, from neighborhood activists to national and international social and environmental organizations, eTown takes pride in celebrating the success stories of ordinary citizens accomplishing extraordinary things. To learn more about the E-Chievement Award, visit www.etown.org.

The Oskar Blues CAN’d Aid Foundation was formed as an immediate response to the massive flooding that devastated our hometowns of Lyons & Longmont, CO, in September 2013. To date, CAN’d Aid has donated $700,000 for flood recovery and an additional $50,000 to charitable causes focused on outdoor rec, child & family advocacy and sustainability initiatives. Shakin’ things up in the world of non-profits, the public charity features funky, fractured, grassroots grants to fund worthy projects from coast to coast. By putting our own spin on what charitable giving looks like, we’re able to stay nimble, respond quickly and stay true to our roots. Every dollar raised by the CAN’d Aid Foundation is matched by Oskar Blues Brewery-doubling the “do-goodery” and maximizing the reach.

Founded as a brewpub by Dale Katechis in 1997, Oskar Blues Brewery launched the craft beer-in-a-can apocalypse in 2002 using a tabletop machine that sealed one can at a time. In 2008, the makers of the top-selling pale ale in ColoRADo, Dale’s Pale Ale, moved into a 35,000-square-foot facility in Longmont, ColoRADo. The brewery has since experienced explosive growth-packaging 59,000 barrels of beer in 2011 and 86,750 barrels in 2012. In December of 2012, Oskar Blues opened the doors to an additional brewery in Brevard, North Carolina. Together, the breweries packaged 120,000 barrels of beer in 2013, distributing its trailblazing craft brews to 35 U.S. states.