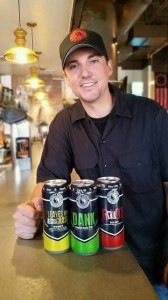 Leaves of Lemongrass is an unfiltered Belgian-style wit beer made with coriander, sweet orange peel and a hearty dose of lemongrass. A straw-colored, thirst-quenching, creamy bodied wheat beer, it has a complex citrusy nose, flavors of wheat and lemon, and a crisp, balanced finish highlighted by deft notes of lemongrass.

“It’s a different type of wit beer,” says head brewer Brian Connery, “with a subtle blend of the typical wit beer spices, plus a flash of lemongrass. It’s super refreshing and unique.” Leaves of Lemongrass is a very sessionable 4.5% ABV.

Riot Red Rye Ale is a malty amber ale enhanced by additions of malted rye and lampong peppercorns. While most rye beers are high in hops and alcohol, Riot is gently hopped and a quaffable 5.5% ABV. The beer features an aroma of lampong pepper, flavors of caramel and Munich malt, and a novel finish of peppercorns and rye spiciness.

“Riot is an edgy beer with exceptional food-pairing ability,” says Thomas “Dad” Hembree, a Dad & Dude’s co-founder who runs the company’s brewpub. “We designed it to match up well with our housemade pizzas and our spent-grain dough.”

Like the company’s resiny but embraceable Dank IPA (6.5% ABV), the new beers fit the company’s approach to small-batch beer. “Our beers are aggressive but artful,” says Mason “Dude” Hembree, son of Thomas Hembree. “We make beer with tons of art, craft and big flavors, but they aren’t absurd. People shouldn’t be afraid of them.”

While Dad & Dude’s Breweria is one of the state’s smallest brewpubs (house beers are made on a 1.5 barrel system), the brewery has big plans. The canned beers are brewed and canned through an alternating proprietorship with Rockyard Brewing in Castle Rock, Colorado. The arrangement gives Dude’s a fast boost in brewing capacity.

“We’re going for it,” Mason Hembree says. “We want to see just how much excitement we can create with our beers, so we’re ramping up our beer production and presence. This new arrangement helps us make that move quickly. And it should handle our beer-production needs for the next year or two while we plan our next move.”

To fund those moves, this summer Dad & Dude’s International, the holding company for the brewpub and Dude’s Brews, crowd sourced $1 million in funding from its patrons. Funds from this unique effort are being used to expand beer production, launch the new beers, and boost new sales & marketing initiatives. “This is also a way for us to live up to our pledge to have a true community business,” Mason Hembree says.

Dank IPA’s accolades include a silver medal (American style IPA category) in the 2014 New York International Beer Competition, and a silver medal in the same category of the 2014 World Beer Championships.

The new can designs for Dank IPA, Leaves of Lemongrass and Riot Red Rye were designed with help from Denver design firm Zenman.

Brian Connery, a 14-year veteran of the craft beer trade, oversees brewing operations for the brewpub and Dude’s Brews. Connery entered the trade at Il Vicino Brewing (Colorado Springs) in 1997. He worked at breweries around the US, including four years as a senior brewer for Dogfish Head Brewing. He returned to Colorado in 2010 and worked for New Belgium and Boulder Beer before joining Dad & Dude’s.

Bard Nielsen has been the head brewer at the Dad & Dude’s brewpub since its start in 2010. An avid homebrewer, he landed his position with help from a pale ale he brewed called “Liquid Resume” that is now a part of the Dad & Dude’s year-round lineup.

“Our goal is to make exceptional beer,” Mason Hembree says. “To do that you need very skilled brewers. These guys have big experience and talent, and they can uphold our quality and character standards for our beer as we grow.”

Cans help in those goals, too. “With their freshness-keeping, recycling and environmental and portability benefits,” Mason Hembree says, “cans are the best package for great beer. They also give us a bigger format for telling our story.”

A family business, Dad & Dude’s was opened in 2010 by Thomas and Mason Hembree with help from family members and friends. Tom is a 30-year veteran of the restaurant industry who was looking for new adventures in business. Mason was an obsessed homebrewer and disenchanted business owner who walked away from his successful tech company to pursue a dream of brewing beer for a living.

“I’m the beer guy,” Mason says, “and my dad’s the pizza guy. So when we opened we met in the middle with the breweria term.”