Remember when the Brewers Association (BA) sparked the “Craft versus Crafty” debate last December? It’s not dead yet.

At a gathering of beer companies this week in Chicago, in fact, it seemed pretty alive, as some high-profile craft and mainstream beer company executives tried to hash out the issue.

To refresh, the BA, which represents the business interest of small brewers, wary of big brewers’ attempts to in an attempt to increase consumer awareness of the definition of craft beer, penned a December 13 Op-Ed piece in the St. Louis Post-Dispatch headlined “Craft or Crafty? Consumers deserve to know the truth.” Later that day, the organization followed it up by issuing a press statement regarding the “increase in production and promotion of craft-like beers by large, non-craft breweries.” Embedded in the release was a downloadable list (which has since been removed) of “domestic non-craft brewers,” that left companies like Craft Brew Alliance, Goose Island and even Narragansett Brewing out of craft’s club. 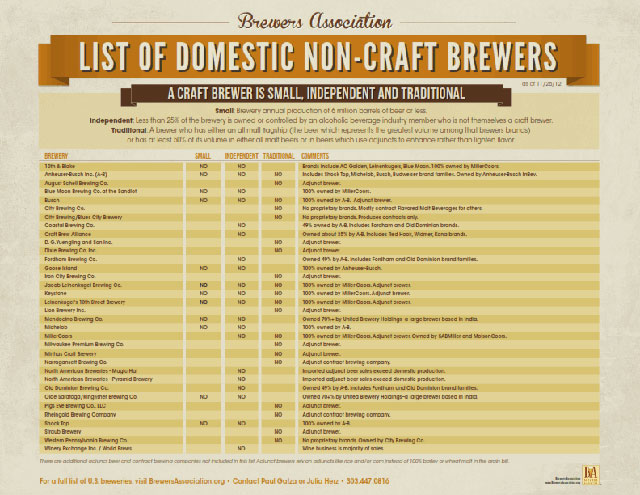 That difference, is one that has allowed craft brewers the ability to command higher prices which stimulate profitability and growth for all tiers of the industry, said Koch.

“If Champagne were a carbonated wine, it wouldn’t command a price premium,” he said, arguing for a distinction between BA-defined ‘craft’ beers and full-flavored beers produced by international mega brewers on beer labels.

Not surprisingly, Cardella had a different opinion.

“You have formed a club,” he said. “At the end of the day, the definition needs to be outlined in a way that makes sense. It’s not about size and ownership, it is more about the art and science and beer coming together.”

Cardella’s argument isn’t lost on the BA either. In December of 2010, it changed its definition of “small” from 2 million barrels to 6 million barrels of annual production, to accommodate for growing craft brewers like Boston Beer Company.

At the heart of Wednesday’s debate was a question of language. Koch said that the BA was wrong to use the word “crafty,” calling it a “denigrating term.”

But Hackett and van den Brink, who admittedly don’t focus much of their attention on the craft segment, agreed.

“To denigrate beer in any way shape or form is destructive to the industry,”Hackett said. “That is flat out wrong. I don’t have a dog in this hunt but this is an industry and we all operate within the industry and we live and die on our respective members to do a good job on behalf of beer.”

Despite Koch’s stalwart defense of craft beer, he took time to apologize on behalf of all craft brewers for a condescending and underlying tone of a debate that, in the end, is about branding.