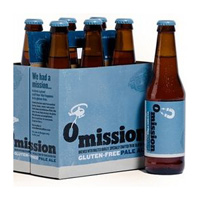 PORTLAND, OR — Craft Brew Alliance (CBA) will distribute its gluten-free Omission Beer in Canada beginning in mid-January. Launched in March 2012, Omission Beer is the first U.S. craft beer brand focused exclusively on brewing great-tasting craft beers with traditional beer ingredients, including malted barley, that are specially crafted to be gluten-free. Omission Lager and Omission Pale Ale, the first two beers in the Omission portfolio, will be introduced in British Columbia in January before moving into other Canadian markets in the coming months.

Omission beers are brewed by Widmer Brothers Brewing in Portland, Ore., using an innovative brewing program to ensure that gluten levels in every batch measure well below the widely accepted international gluten-free standard of 20 parts per million (ppm) for food and beverages. Every batch of Omission beer is tested by the brewery and an independent lab, and all test results are available to consumers at: www.omissiontests.com.

The international gluten-free standard was set forth by the Codex Alimentarius Commission, which was created in 1963 by the Food and Agriculture Organization of the United Nations and the World Health Organization. Health Canada also adopted this gluten-free labeling standard, citing that, “the best currently available scientific evidence indicates that levels of gluten below 20 ppm in gluten-free foods would be protective of the health of the vast majority of people with Celiac disease.

“We look forward to sharing Omission with Canadian consumers,” said Terry Michaelson, CEO of CBA. “As a longtime celiac, I’m excited to bring the Omission craft beer experience to those who have previously been unable to enjoy a great beer brewed with traditional beer ingredients because of gluten intolerance. The best thing about Omission beers is that they are great-tasting brews that can be enjoyed by anyone of legal drinking age, not just those with gluten sensitivities.”

“Unlike many other gluten-free beers on the market, Omission beers are brewed using traditional beer ingredients: malted barley, hops, water and yeast,” said brewmaster Joe Casey. “This considerably broadens their appeal. Omission Lager and Omission Pale Ale are both great-tasting craft beers that are true expressions of their respective styles.”

Omission beers will be distributed in Canada by AFIC Group.

Omission Lager is a refreshing and crisp beer, brewed in the traditional lager style. Omission Lager’s aromatic hop profile creates a unique, easy-drinking gluten-free beer for those looking for a lighter beer style.

Omission Lager and Omission Pale Ale have a suggested retail price of $15.95 per six-pack and will be available in 12-ounce bottles at retailers, restaurants and bars.

Omission Beer is a new brand of craft beers introduced in 2012 by Craft Brew Alliance in Portland, Ore. Omission is the first craft beer brand in the U.S. focused exclusively on brewing great-tasting beers with traditional beer ingredients, including malted barley, that are specially crafted to remove gluten. Each batch of Omission Beer is tested using the R5 competitive ELISA test to ensure that it contains gluten levels that meet the brewery’s strict standards. Drinking is believing.

Craft Brew Alliance (CBA) was formed with the merger of leading Pacific Northwest craft brewers Widmer Brothers Brewing and Redhook Ale Brewery in 2008. With an eye toward preserving and growing one-of-a-kind craft beers and brands, CBA was joined by Kona Brewing Company in 2010. CBA launched Omission beer in 2012. For more information about CBA, visit www.craftbrew.com.