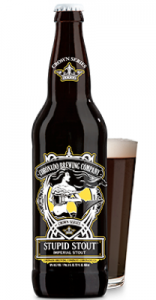 Coronado, CA — Stupid Stout, a seasonal American Imperial Stout, is again making its way to craft beer drinkers across the country beginning mid October through January 2014 as part of the Southern California brewer’s Crown Series. This American Imperial Stout was originally brewed by Coronado Brewing Co. in 2008 as an English Stout, then returned with a new West Coast recipe in 2011 to eager fans loving what president and co-founder Ron Chapman affectionately calls “a stupid amount of hops”.

This year’s Imperial Stout is a great winter companion and appeals to craft beer lovers who appreciate deep, dark, robust and chocolaty flavors with a bright hint of hop freshness. Stupid Stout will be available in 14 states where Coronado Brewing is sold as well as its pub restaurant in Coronado and tasting room in San Diego. Also on tap will be barrel aged small batch of Stupid Stout, as well.

Where to find it:

In 1996, when craft beer was still a foreign term and San Diego County was home to only a handful of breweries, the Chapman brothers Ron and Rick opened a brewpub in their hometown of Coronado. The Chapmans brew abundantly hoppy West Coast-style ales, with their early success driving demand outside the brewpub. They began distributing their beers throughout the local market, and today you can find Coronado beers in 13 states across the US. As well as a pub and restaurant, the company launched a tasting room in San Diego in early 2013.