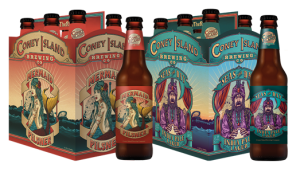 New York, NY — The rides have stopped and the crowds have gone home, but for Coney Island Brewing Company, excitement is in the air. Coney Island Brewing is pleased to announce all things new: a new look, a new take on an old favorite, a brand new beer and for the first time ever, beer available in six-packs.

Behold, the new look of Coney Island Brewing and the launch of two bottled beers. The first, an original Coney Island brand favorite, Mermaid Pilsner, has been revamped with a whole new look and is ready to captivate thirsty New Yorkers. This crisp, light-bodied, hopped lager is brewed with rye malt, providing a mild spiciness. The flavor is balanced perfectly by a fruity, floral hop aroma. Mermaid Pilsner is available on draft, and now, in six-packs too.

Rounding out the duo is an entirely new beer for Coney Island — Seas the Day India Pale Lager (IPL). This hop-forward IPL has big citrus and passion fruit aromas that lead into a full-bodied, easy drinking golden lager with an intense bite.

Both Mermaid Pilsner and Seas the Day IPL will make their debut in six packs that celebrate the romance and energy synonymous with the famous New York City landmark.

“The romance of Coney Island lives in all of us who have had the pleasure of experiencing it for ourselves, and it’s that romance that we’re trying to bring to the new Coney Island and the launch of these two beers,” says Alan Newman, of Coney Island Brewing Company.

Coney Island Brewery’s Mermaid Pilsner and Seas the Day IPL will be available in bottles beginning in January 2014, with distribution planned throughout the metro New York area.