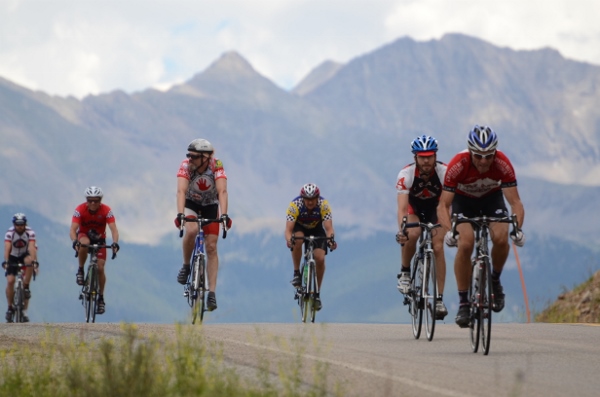 Other riders have come and gone during the first four years of the Tour de Bouldurango, but Adam Avery of Avery Brewing Co. and Dave Thibodeau of Ska Brewing Co. have stuck with it, suffering together through mile after mile and vertical foot over vertical foot.

Distance wise, it isn’t necessarily an unprecedented feat—just 1,900 miles over four years, which is the equivalent of riding from Boulder to Disney World. Sounds easy enough, right? But there is a catch. They have also climbed a bit of vertical in that time, 168,000 vertical feet to be exact- or the equivalent of 168 Empire State Buildings stacked end to end.

“I know there will be pain,” Adam said of the fifth annual Tour de Bouldurango, which starts Monday July 15th. “There’s going to be good and bad during this thing. But the whole time I know that in six days I’ll be eating tacos and drinking badass beer with my brother Dave at his brewery. I’ll trade the pain for the chance to be disconnected from the outside world and be connected to my bike and brewing bros.”

When Adam and Dave climb back onto their saddles again this year they will be joined by 10 other brave souls, including Left Hand Brewing Company owner and founder Eric Wallace and Jeff Brown, owner of the Boulder Beer Company. As a team they will depart Boulder on the annual journey—some say quest—known as the Tour de Bouldurango: a six-day, 476-mile, odyssey over eight mountain passes from Boulder to Durango. The goal is to raise money for local charities and to encourage the spirit of camaraderie and collaboration for which the craft beer industry has become known.

“It’s so cool to get together with some other brewers away from our breweries and just drink some beer and talk shop, just get away,” Adam said. “Sometimes at your own brewery you get locked into box. It’s great to break out of that and share some experiences and ideas. When you suffer through a long ride with someone and have beers with them afterwards you really start to figure them out. I’ve learned more about people in just a few days on this ride than I have after years of working with them.”

It all began back in 2009 when Dave’s phone rang. “It was Adam and he had this crazy idea about riding bikes from their brewery to ours, and stopping along the way to do fundraisers for charity. Of course I said yes, which was pretty dumb, but it seemed far enough away that either I’d get in shape or maybe the whole idea would drop off. Neither happened, and now we’re in our fifth year.”

Each day’s ride will end with beers at a local pub or brewery. Stops for the cyclists will include Tommyknocker Brewery in Idaho Springs, Breckenridge Brewery and Ollie’s Pub & Grub (where there will be a mini tap takeover on Tues. night) in Breckenridge, Eddyline Brewing in Salida, Brick Oven Pizzeria and Pub in Crested Butte (another mini tap takeover Thurs. night), Colorado Boy Pub and Brewery in Ridgway, Ouray Brewery in Ouray, and the finishing Bouldurango Beer Festival and fundraiser at Ska Brewing World Headquarters in Durango. To commemorate the ride, Avery Brewing Co. will release their annual batch of the SKAVERY Wheelsucker Wheat, collaboratively conceived of with Ska Brewing Company. The brew is a refreshing German-style Hefeweizen with a hazy golden pour and 5.0% abv. It will be available along the route at Ollie’s in Breckenridge, The Brick Oven in Crested Butte and at the Bouldurango Beer Festival at Ska at the finish of the ride.

Established in 1993 in Boulder, CO, Avery Brewing Company has developed a reputation as being one of the most daring and visionary breweries in the nation. They are the brewers of Avery IPA, The Maharaja Imperial IPA, White Rascal Belgian Wheat Ale, Mephistopheles’ Stout and eighteen other year-round and seasonal beers.