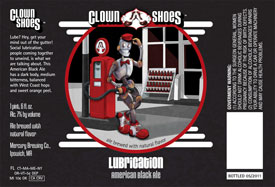 BOSTON – The debate over the most recent Clown Shoes label for “Lubrication,” raged on Beer Advocate today after Candice Alstr├Âm, the Director of Events and Promotions for the company published a thread entitled “Done with Clownshoes.”

The opinionated rant focused on the graphics for Clown Shoes’ most recent beer, “Lubrication.” In the post, Alstr├Âm writes:

Alstr├Âm, concerned that sexual innuendos were being used to sell the product, defended her initial statement with multiple responses on the issue. Co-Founder of Beer Advocate, Todd Alstr├Âm and Candice Alstr├Âm also took to twitter to voice their opinion.

A flood of beer fans chimed in (350 replies), each with varying opinions on the matter. Clown shoes has since published a lighthearted response entitled “Super Official Clown Shoes Response Letter,” which can be seen below.

The label copy on the bottle reads – “Lube? Hey, get your mind out of the gutter! Social lubrication, people coming to unwind, is what we are talking about…” The beer has been locally-released in 22 oz bottles and will soon make it’s way to 12 oz., 4-packs.

We would like to take this opportunity to apologize to each and every one of you.

We are sorry for forcing everyone to have to endure the huge amounts of physical and psychological trauma we have caused by putting pictures of robots and cartoon women on our beer labels. God forbid you manage to actually open the bottle after seeing the horribly offensive labels because, as we all know, beers with an average rating of B+ are not even that good and shouldn’t be drank by anyone.

We are sorry for even considering the thought that we should try and be funny with our packaging and are taking steps to remove all images and colors from our labels. From this point forward, all of our labels will be primarily government warnings on a white label with a small section that has the name of the beer on it.

As a result of this PR fiasco, I have personally fired every person on our design team, without severance, and submitted their names to a FBI watch list for people who have terrible senses of humor. We will be replacing them with unemployed accountants, all of whom I have personally screened to ensure that they have no sense of humor whatsoever and will not go “outside the box” when designing new packaging.

We are also making some changes to our existing line-up of beers:

We are also taking steps to stop production of our new beers for fear that they also may be offensive to someone. We are actively brainstorming new ideas for names and packaging that will be so unoffensive you would think that Disney designed them.

We would like to take this time to thank Candice Alstrom for using her influential position as a Beer Advocate staff member to voice her opinion in the most visible way possible about our brand. We would not exist if it weren’t for constructive consumer criticism like this, especially when people of authority share it publicly. It is our opinion that anyone who has the power to express themselves should always do so, particularly when the setting in which you do so lends you extra credibility beyond that of normal discussion participants.

As a measure of public service, we are drafting a letter of petition that the community can send to any brewery who uses sex or humor in their packaging. Once our crack team of lawyers has poured over it, we will circulate it through the proper channels to be signed and distributed to all offending breweries.

Additionally, we have created a new email address, beerpolice@clownshoesbeer.com, so that any member of the public can inform us of a label that offends them then we can take the appropriate action to stop the offense.