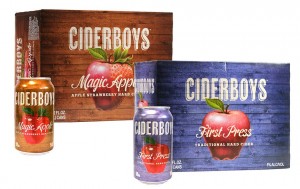 Hard cider sales continue to blossom across the U.S.A. and the growing popularity of can packages are part of the success story, according to Gabe Hopkins, Ciderboys Head Cider Maker.

“Like craft beer fans, craft hard cider fans are recognizing the appeal of cans,” he said. “There’s customer demand for First Press and Magic Apple in cans, and the customer is always right.”

“Cans often can go where glass bottles should not or cannot; they’re perfect for the beach, the boat or the campground, for example,” Hopkins said. Hard Cider Success Beverages in cans are also especially popular in certain retail channels like convenience stores where total hard cider sales skyrocketed 184% in 2012 compared to 2011, according to a November report from market research firm Nielsen. Overall U.S. hard cider sales through November 30 last year increased 75% versus 2011, Nielsen reported. Sales of fruit-flavored hard ciders like Magic Apple are growing at a similar rapid rate.

Magic Apple, one of Ciderboys’ fruitful pairings, combines the taste of fresh strawberries with crisp apple cider. First the Ciderboys cider makers blend strawberry juice in with Washington State apple juice. Then yeast is added and the cider is fermented slowly at cool temperatures. When fermentation is complete, the cider goes through a filtration process, resulting in a clear, crisp sparkling liquid. No sugar is added. Like all Ciderboys carbonated hard ciders, Magic Apple and First Press, a traditional hard cider, are naturally gluten free.

“Hard cider’s recent surge in popularity is no surprise to us at Ciderboys,” Hopkins said. “Americans have consumed hard cider since colonial days, when it was likely available only in kegs. Today hard cider fans enjoy our First Press and Magic Apple hard ciders in bottles and kegs, and now in cans, too.”