After a decade working for some of the best known brands in the cider industry, Caitlin Braam is launching twin projects of her own: Yonder Cider and The Source.

Braam and co-founder Tim Larsen have created The Source, a business-to-business purveyor of fruit, pressed juice and fermented cider. The Source begins operations in two weeks and is based in Wenatchee, Washington, the self-proclaimed Apple Capital of the World.

“Wenatchee is a really striking and beautiful place,” Braam said. “Central Washington and eastern Washington are technically a desert — you’ve got these big cliffs and in the middle of them, these beautiful valleys are just full of fruit. There’s apples, cherries, pears, hops, for that matter, and grapes.”

“Unlike a lot of facilities that you move into with a new brewery or cidery that don’t have plumbing, that don’t have cold rooms, this came with everything already there, so we feel very, very lucky,” Braam said. 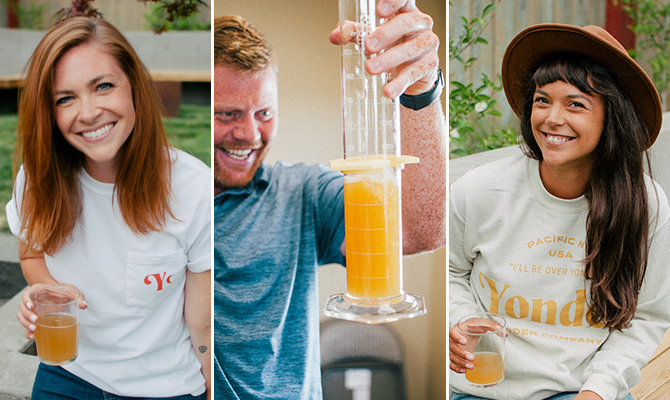 The Source’s capacity is 400,000 gallons — about 13,000 barrels — and will exclusively use Washington apples, the majority of which will come from the Wenatchee area. So far, the company has 10 clients lined up. To start The Source, Braam and Larsen acquired assets and inventory from Sun Red Cider, a similar outfit run by the late Warren Morgan.

Braam, who serves as president for both The Source and Yonder, envisions The Source as a partner for companies who have just launched or are toying with the idea of expanding into new markets.

“What The Source allows cideries to do is get started or expand without investing a ton more capital into tanks and then all the equipment that comes along with that,” Braam said. “As people want to ebb and flow, The Source can ebb and flow beside the company.

“We can do everything from sending juice — raw juice — to sending finished, fermented cider. We can also blend, so if somebody has a specific recipe, we can help hit that recipe. People who are looking to scale up a cider or looking to expand their sales market, we can help them do that without them having to buy bigger tanks,” she continued.

Larsen will serve as head of production for The Source and head cidermaker for Yonder, which will land on shelves in Washington in August, and be available for direct-to-consumer shipping to 40 states through Vino Shipper.

Braam is no stranger to marketing a new brand. She started her career as a freelancer with Seattle-based Two Beers Brewing Company. When Two Beers’ leadership launched Seattle Cider Company, Braam was tapped as sales and marketing director and later named president of the fast-growing brand.

“We went from a cider that was brand new to, in four years, a cidery that was in 16 states,” she said.

The Agrial Group, a French agribusiness cooperative, acquired both companies in September 2016. Braam left Seattle Cider in August 2017, and joined Boston Beer Company’s Angry Orchard as a brand strategist in January 2018. Her position was eliminated in October 2019.

In addition to starting two companies simultaneously during the COVID-19 pandemic, Braam is also serving as an advisor to Burlington, Vermont-based Zafa Wines.

At launch, Yonder will offer three ciders: dry, semi-sweet and Palisades, a seasonal offering with sage and blackberry. The seasonal portfolio includes three ciders that will be in market for four months each and are mixology inspired. Palisades is based on a cocktail at one of Braam’s favorite bars, Oliver’s Twist in Seattle.

The ciders will combine culinary and cider apples, a mix of fruit not often seen in the same libation, which was important to Braam.

“I wanted to not just have another modern cider on the market,” she said. “I wanted to create a product that blended these modern ciders that are culinary fruit-based only and are delicious and affordable with these beautiful ciders that have cider fruit, but they tend to be a bit more expensive.

“I figured there has to be something in between — we could have an affordable cider that also had the beautiful aroma, the mouthfeel and flavor to a degree of what some of these beautiful cider fruit ciders had,” she continued.

“We’re able to create a cider that’s still affordable and still accessible in a 16 oz. can, but that has a more full and beautiful palate,” Braam said.

All three Yonder ciders will launch in 4-packs of 16 oz. cans, priced at $11.99, and on draft; Braam expects 70% of the brand’s volume to flow through the off-premise channel.

“Part of our original plan was to look at a taproom in Seattle because that’s where our large consumer base is,” Braam said. “However, with COVID, we put that on hold.”

The COVID-19 pandemic has forced alcohol producers nationwide to find creative ways to introduce their products to consumers at a time when bars and restaurants have either closed completely for on-premise service or are adhering to a completely different code of operations.

“Your standard opening a tasting room and a launch party just isn’t going to happen,” Braam said. “So we tried to think of other ways to get Yonder out there and make it accessible to people rather than just grocery stores.”

Instead, the company will open a walk-up retail store on August 7 in a space on one of Seattle’s new “Stay Healthy Streets,” which are closed to automotive traffic to encourage social distancing for pedestrians. Other launch plans include paired takeout specials with restaurants across Seattle beginning August 10.

“COVID has been challenging, there is absolutely no doubt about it,” Braam said. “But it has me and my team thinking even further outside the box when it comes to marketing and branding and how to reach our audience. And I think if there’s gonna be one good thing that comes from this, that will be it.

“I feel really proud of what we’ve developed and how we’re going to market and what we’re providing to our customers even before they can try the cider.”