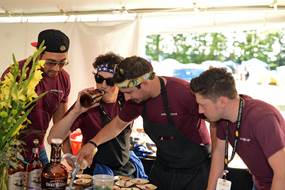 Goss’s competition included regional winners Chef Nick Macri of Southwark in Philadelphia, Josh Smith of The Franklin Café and Michael Lombardi of The Salty Pig, both in Boston, and Mark Graham of Max London’s Restaurant and Bar in Albany, NY. Each of these chefs won the ‘“Hop Chef”’ competition in their respective cities in order to compete at the finale in Cooperstown. Saturday’s competition elicited intense focus from the chefs while the exclusive group of festival attendees who secured admittance through a Facebook lottery clamored after the imaginative dishes.

“The best of the best came to Cooperstown and they pulled out all the stops,” said Simon Thorpe, President and CEO of Duvel USA/Brewery Ommegang. “Each chef and dish could legitimately and proudly have been awarded top honors. The thoughtfulness the chefs brought to matching just the right cuisine elements and treatments with the nuances and ingredients of the beer was extraordinary.”

“Hop Chef” is part of Ommegang’s Great Beer Deserves Great Food┬« initiative — dedicated to the advancement of great beer as a perfect complement to fine fare. This year the competition added another dimension — raising funds to benefit a cause that assists the communities in each participating city. In all, worthwhile causes in Philadelphia, Boston, Chicago and Albany received more than $14,000 in total to benefit initiatives ranging from mural revitalization to cooking programs.

While the Hop Chefs battled it out, more than 2700 beer lovers enjoyed the rest of the festivities at “Belgium Comes to Cooperstown,” Ommegang’s annual beer festival. In its 10thyear, BCTC featured more than 75 breweries and importers pouring Belgian and Belgian-style beer, a cigar tent, local artisan cheeses, and the Duvel Art Contest hosted by Brooklyn artist, Mike Perry. The festival also featured a Ferris wheel, live music, fireworks, and on Fridaynight, a six-course seated VIP dinner.

Brewery Ommegang opened in 1997 to craft-brew fine Belgian-style ales. The brewery creates six ales year-round, as well as an imaginative range of seasonal and specialty ales. The beers have national following by connoisseurs of fine beer and are distributed in 45 states and internationally. Ommegang is located on a 136-acre farmstead in Cooperstown, New York, USA and offers free daily tours and inexpensive tastings as well as a 100-seat café, a well-stocked brewery store, and an annual calendar of public events.