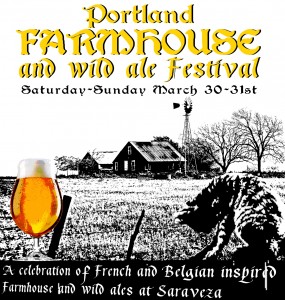 PORTLAND, Ore. — Farmhouse-style beers are among the most rustic and traditional ales of the farming regions of France and Belgium and until recently were virtually unknown in America. In recent years breweries of the Pacific NW have helped bring about the resurgence of these beers with traditional methods like using locally grown ingredients that may be found in our farms and fields.

Held at North Portand’s Saraveza Tavern and neighboring Bad Habit Room on Saturday and Sunday March 30th and 31st the festival will feature more than 20 farmhouse style beers from across the country, many never before available and from both established and new breweries. The 2 day festival will feature rotating taps at both Saraveza and the Bad Habit Room changing over 2 days and outdoor seating and standing space on N. Michigan. Advanced ticket purchase is encouraged. The taplist will include classics like Ommegang’s Hennepin to rare kegs from breweries like Anchorage’s Anadromous and Rondy Brew, vintage beers such as 2011 Provisions from Block 15, exclusive one-off kegs like Byrd Stout from Upright Brewing and beers not even distributed in Oregon like Telegraph Brewing’s Obscura Vulpine with Blackberries.

Entrance fee to the festival is $20 which includes a commemorative Farmhouse Festival glass and 10 drink tickets good for a 4oz sample of beer (some beers are more expensive and cost 2 tickets per sample).

About Saraveza:
Derived from the owner’s name and the Spanish word for beer, Saraveza Bottle Shop & Pasty Tavern is a place to celebrate craft beer, eat well and enjoy friends and strangers alike. We’re a North Portland watering hole and craft beer convenience store w/ 250+ bottles and 9 rotating taps. Whether you’re new to the brew scene and need some guidance or an old pro just looking for something rare, Saraveza’s beertenders will find a flavor that works for you.