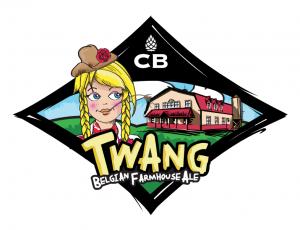 Honeoye Falls, NY — CB Craft Brewers is launching a brand new craft beer for spring, Twang Belgian Farmhouse Ale. The style is a Saison, also known as a farm house ale. Tracing its roots to the early 19th-century, traditional farm house ales were brewed with whatever what was on hand. The result was that no two batches were alike. Emphasis on individuality, rather than uniformity, is evident in modern Belgian, French and American versions.

Twang is a Belgian version, conveying a true sense of respect for the origin of the farm house ale. The beer is rustic and complex with notes of citrus. The addition of Heather tips and Rose hips give Twang a unique tart characteristic. The beer is light, dry and effervescent and will refresh and sustain all season long. 6% ABV.

Twang Belgian Farm House Ale will be released March 21, 2014 in draught only and will be available at CB Craft Brewers, The Pint & Goblet Tavern and select bars and restaurants throughout WNY and the Finger Lakes.