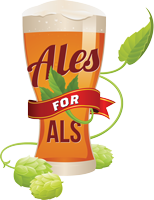 Ales for ALS India Pale Ale is an American IPA, deep gold in color, balanced bitterness with open ended hop flavor and aroma. (44 IBUs 6.1% abv). The beer will be available on draft and in 22oz bottles at CB’s Tasting Room, area bars and grocery chains.

A First Pour Event will be held at CB Brewing Company Friday Jul 19th at 5:30pm. A portion of every growler, keg, bottle and pint sold will go to the ALS Therapy Development Institute. The brewery’s goal is to raise well in excess of $1000 for the Ales for ALS cause.

About the ALS Therapy Development Institute

The ALS Therapy Development Institute (ALS TDI) is the world’s leading ALS research organization and aims to discover and develop effective treatments and a cure for ALS. Built by and for patients, the Cambridge, MA based drug development institute operates as a 501c3 nonprofit: combining the optimal entrepreneurial practices of a biotechnology and pharmaceutical company with the passion and urgency of a nonprofit mission. For more information visit www.als.net. For more information about the Ales for ALS program visit www.alesforals.com