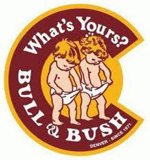 The mad scientists at Bull & Bush Brewery are playing with hops.

A process which they are calling Whole Hop Infusion involves steeping hops (and beer) in a french press for up to ten minutes. The whole thing is aimed at giving drinkers the opportunity to see how a single ingredient can affect the subtle nuances of a beer.

Beer aficionados will recall Dogfish Head doing similar experiments in their “Randall” creation, but the approach Bull & Bush takes allows for variability based on consumer preference.

Below is the press release which explains Whole Hop Infusion in greater detail. Jonathan Shikes of Westword.com experienced the process first hand and wrote about it in a recent blog entry.

DENVER, CO – The Bull & Bush Pub and Brewery, Colorado’s favorite watering hole, today announced Whole Hop Infusion, a process that brings the art and science of dry hopping tableside for the uninitiated to the geekiest of beer geeks. Currently available at the Bull & Bush in Denver, guests can now get a pour of beer, infused in real-time with their hop variety of choice. The Hop Inciter 3000, equivalent to a French press used for steeping coffee, allows drinkers to experiment with how beer’s most popular ingredient affects the characteristics of the beer.

Guests of the Bull & Bush can pick any house beer then choose from various hop varieties offered on the infusion menu. The ingredients are combined in the Hop Inciter 3000 and the customer decides how long to wait before pouring the beer and tasting the custom infusion.

“Brewer’s have been dry hopping beers for ages to achieve various desired affects, but the process is time consuming and can be very expensive. We thought Whole Hop Infusion would be a great way to allow beer fans to do some of their own experimenting,” says Erik Peterson, Minister of Progress at the Bull & Bush. “It has also turned out to be a great educational experience for people who want to learn more about the beer making process. They get to see, feel, smell and taste actual hop cones, possibly for the first time.”

Allowing the beers to hop steep for just a few minutes will add a significant shift to the original flavor of the beer. Hard core hop fans can wait longer and dial it up to a palate crushing punch, especially if they start with a beer that already has a high hop quotient, such as the Bull & Bush Man Beer, an award-winning English style IPA.

The Whole Hop Infusion experience is currently only available at the Bull & Bush, but the hop heads at the brewery plan to eventually roll it out to other locations carrying Bull & Bush beers. In February, Denver’s Table 6 will begin offering Whole Hop Infusions to customers. Bull & Bush is the exclusive beer on tap at the local favorite American bistro.

“We’ve had a long standing partnership with the beer artists from the Bull & Bush, as we have a similar passion for bringing unique experiences to our customers,” said Aaron Forman, Head Dishwasher and co-owner of Table 6. “Whole Hop Infusion is another innovative and interactive offering for our guests.”

About the Bull & Bush Brewery:

The Bull & Bush Brewery is a small brewpub, located in the Cherry Creek Neighborhood of Denver that has, since 1971, been ‘The Granddaddy of Denver Watering Holes.’ On New Year’s Day 1997, the brewery started producing traditional hand crafted English-Style ales, as well as other global styles, to pair perfectly with the well-known pub food and friendly atmosphere. The Bull & Bush beers have won multiple accolades including Best Brewpub award in Westword’s Best of Denver and multiple awards at both the annual Great American Beer Festival (GABF) and the World Beer Cup — the world’s largest commercial beer competition.