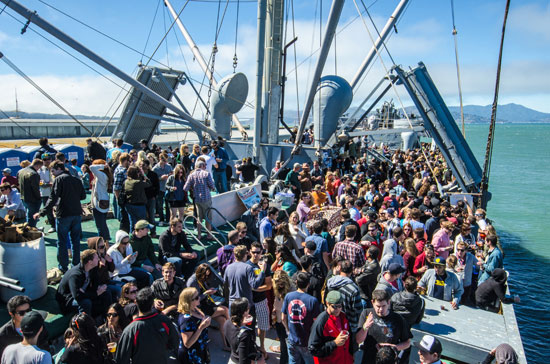 SAN FRANCISCO – The San Francisco Brewers Guild will be celebrating 10 years of Brews on the Bay aboard the historic S.S. Jeremiah O’Brien at Pier 45, Saturday, October 19th, from 12-5pm. Beer fans will enjoy over 50 different beers made by San Francisco breweries, while soaking up the salty air, sunshine, live music, food, and spectacular views of the Golden Gate Bridge, Alcatraz and San Francisco.

Brews on the Bay is one of the most unique beer festivals in the country. This year’s event is shaping up to be the biggest and best yet. Attendees can expect members of the San Francisco Brewers Guild to serve unlimited eight-ounce pours of their latest and greatest IPA, farmhouse ale, session beer, barrel-aged sour, imperial stout, and many other beer styles. The brewers will also be on hand to answer any questions about your favorite beers.

In addition to the local beer, Brews on the Bay will serve up local food and music. San Francisco’s best food trucks will line the pier and The Brothers Comatose will play their lively roots music on the ship’s deck.

The S.S. Jeremiah O’Brien is a historical landmark from the World War II Merchant Marine era, and a portion of festival proceeds will benefit the National Liberty Ship Memorial. Brews on the Bay tickets will go on sale August 5th at 10:00am. For the latest event updates, follow us on Facebook or Twitter.