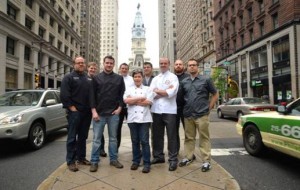 COOPERSTOWN, NY — On Tuesday, July 8 at 6 p.m., nine of Philadelphia’s most beer-forward chefs will descend upon Union Transfer (1026 Spring Garden Street, 215-232-2100) to compete in Brewery Ommegang’s third-annual HopChef Philly culinary competition for a chance to represent the city in a cook-off at the brewery’s annual Belgium Comes to Cooperstown event. Each chef will prepare and serve an innovative, original dish inspired by one of the brewery’s Belgian-style ales to top local food experts who will judge the dishes. The winning chef earns a trip to Cooperstown to compete against winners from other cities for the title of HopChef 2014. Doors open at 6 p.m. and contest begins at 7 p.m. Tickets are $50 and can be purchased at ticketfly.com.

Each chef recently announced the Ommegang beer that he or she has chosen for the competition: Rare Vos, an amber ale that is mellow, fruity and spicy, for Chef Puchowitz; Witte, a traditional Belgian-style wheat ale that is flavorful, soft and hazy, for Chef Nolen; Hennepin, a hearty and rustic golden ale that is full-bodied, hoppy and crisp, for Chef Masar and Chef Kenngott; Three Philosophers, a blend of Ommegang Quadruple Ale and Liefman’s Kriek cherry lambic, for Chef Vetter; Abbey Ale, a rich, fruity and aromatic Burgundian brew, for Chef Choplin; Hop House, pale and hoppy with notes of citrus and tropical fruits, for Chef Jonathan and Justin Petruce; and Gnomegang, a blonde ale with a brilliant golden hue that is accented with delicate flavors of light caramel and candy sweetness, for Chef Wentz.

“As we gear up for another spirited HopChef competition, we look forward to the contestants’ playful smack talk, inside jokes and previews of their dishes on Twitter and other social media,” says Megan Maguire, Ommegang Market Manager. “But there’s a serious amount of culinary talent in play, as well, and some awesome prizes — which makes being a part of HopChef even more rewarding.”

FOX 29 news anchor Mike Jerrick, a 10-time Emmy Award winner and co-host of Good Day Philadelphia, will serve as master of ceremonies while guests sip and sample their way through the event. Judges for HopChef Philly are Collin Keefe of thedrinknation.com; Danya Henninger of Zagat Philly; Nicholas Elmi, Top Chef winner and chef-owner of Laurel; Arthur Etchells of foobooz.com; Caroline Russock of Citypaper’s Meal Ticket; Will Blunt of starchefs.com; and Carly Szkaradnik of Eater Philly.

HopChef is part of Ommegang’s Great Beer Deserves Great Food┬« program, a national initiative dedicated to the idea that fine beer deserves a rightful place at the table with fine foods. HopChef Philly joins HopChef events across the country, culminating in in the Grand Finale at Ommegang’s Belgium Comes to Cooperstown Festival on August 8 and 9 in Cooperstown, NY. Participating sponsors include SAVEUR Magazine, StarChefs, VerTerra, and Vitamix. The winner of the HopChef Grand Finale will receive a spotlight position on the SAVEUR TastemakersÔäó chef advisory board, a spotlight in SAVEUR Magazine & StarChefs.com editorial, a showcase with Brewery Ommegang at the StarChefs.com International Chefs Congress and a showcase station with Brewery Ommegang at the SAVEUR Summer BBQ, both in New York.

Fans (and food and beer lovers) should follow the chefs on Twitter (#HopChef) as they taste Ommegang beers and create their competition dishes. For more information, or to purchase tickets, visit the event page on Facebook. You can also follow Ommegang on Twitter @BreweryOmmegang and @OmmegangPhilly.

Brewery Ommegang opened in 1997 to craft-brew fine Belgian-style ales. The brewery creates seven ales year-round as well as a range of seasonal and specialty ales. The beers have won national following by connoisseurs of fine beer and are distributed in 43 states. The brewery is located on a 136-acre farmstead in Cooperstown, New York and offers free daily tours and tastings, as well as a Café, a well-stocked brewery store, and an online store. For more info on Brewery Ommegang, please contact info@ommegang.com, call 1-800-544-1809, or visit www.ommegang.com. Brewery Ommegang is a member of the Duvel Moortgat family of fine beers.