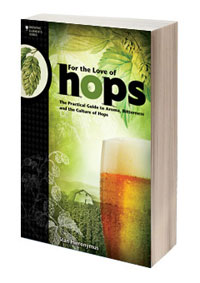 BOULDER, CO – Centuries ago, brewers discovered the potential of an unassuming flower growing on vines. Now, it’s nearly impossible to find a beer without hops, which is why Brewers Publications tapped beer and homebrewing expert Stan Hieronymus to pen For the Love of Hops: The Practical Guide to Aroma, Bitterness and the Culture of Hops.

Hieronymus applies his extensive research to explain the nature of hops, their origins and how brewers maximize their positive attributes throughout the brewing process. For the Love of Hops covers the basics of hop chemistry, then examines the important role farmers play and how brewers can best choose the hops they need. It includes fundamental information about and descriptions of more than 100 hop varieties, along with 16 recipes from around the world, including from top U.S. craft brewers.

Hieronymus also explores hop quality and utilization, with an entire chapter devoted to dry hopping. Throughout, the author’s research and accessible writing style educate the reader on the rich history of hops and their development into an essential ingredient in beer.

As Ken Grossman, founder and owner of Sierra Nevada Brewing Co., writes in the book’s foreword, “This book is an amazing compendium on the hop, written at a level of detail that will captivate historians, chemists and brewers alike. Stan Hieronymus’ exhaustive research traces the history and evolution of many traditional and recently developed cultivars embraced and supported by craft brewers, and reveals a great deal about the dynamics driving the industryÔÇª. This book is technically sound, very well researched and footnoted, and digs into the use and history of hops in a deep and relevant way.”

Brewers Publications is the largest publisher of contemporary and relevant brewing literature. It supports the mission of the Brewers Association by publishing over 50 titles of enduring value for today’s craft brewers and homebrewers as well as titles that promote understanding and appreciation of American craft beer.

The Brewers Association is the not-for-profit trade association dedicated to small and independent American brewers, their craft beers and the community of brewing enthusiasts. The Brewers Association (BA) represents more than 70 percent of the brewing industry, and its members make more than 99 percent of the beer brewed in the U.S. The BA organizes events including the World Beer Cup┬«, Great American Beer Festival┬«, Craft Brewers Conference & BrewExpo America┬«, SAVOR?: An American Craft Beer & Food Experience and American Craft Beer Week┬«. The BA publishes The New Brewer magazine and its Brewers Publications division is the largest publisher of contemporary and relevant brewing literature for today’s craft brewers and homebrewers. Beer lovers are invited to learn more about the dynamic world of craft beer at CraftBeer.com and about homebrewing via the BA’s American Homebrewers Association. Follow us on Twitter.