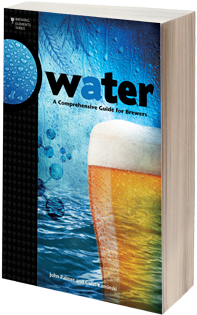 BOULDER, Colo. — Ingredients like hops, barley and yeast are widely understood by brewers, but one element is often overlooked: water. Brewers Publications is pleased to announce the release of Water: A Comprehensive Guide for Brewers, by John Palmer and Colin Kaminski, which will help brewers who have long been flummoxed by the liquid’s complex chemistry.

The third book in Brewers Publications’ Brewing Elements series, this detailed guide is the first book solely devoted to the use and treatment of water throughout the brewing process. From an overview on sources, quality and geography, the book shows brewers how to read water reports, understand flavor contributions, and adjust the chemistry of brewing water. A discussion of adapting water to styles of beer, residual alkalinity, malt acidity, mash pH, brewery process water and wastewater treatment is included.

“If you don’t get the water right, neither will you succeed with the beer,” said Charlie Bamforth, professor of malting and brewing sciences at the University of California in a review on the book. “Water is a precious commodity, from its availability, through its quality, right to its departure down the drain. It demands respect and that is precisely what it receives in this book, which is packed with valuable information, calculations and best practice guidelines for brewers large and small.”

Co-author John Palmer also wrote the bestseller How to Brew: Everything You Need to Know to Brew Beer Right the First Time and Brewing Classic Styles with friend and brewer Jamil Zainasheff. His experience stems from a background in metallurgical engineering and over the years he has helped design, build and inspect hardware that is currently flying on the International Space Station.

While working as a product designer for MoreBeer! Homebrew Supplies, co-author and homebrewer Colin Kaminski designed more than 180 products, including their Peltier cooled conical fermenter. In 2003, he became the master brewer at Downtown Joe’s Brewery and has brewed more than 800 7bbl batches in nine years as the head of a one-man department. He was also awarded the Beer Writers Guild Feature of the Year Award for his Brew Your Own article “Bring on the Heat.”

Brewers Publications supports the mission of the Brewers Association by publishing books of enduring value for amateur and professional brewers as well as titles that promote understanding and appreciation of American craft beer. With over 50 titles to choose from, it’s the largest publisher of contemporary and relevant brewing literature for today’s craft brewers, homebrewers and beer enthusiasts.

For more information and a behind the scenes interview with Palmer on the new release, please visit the Brewers Publication website.

Water: A Comprehensive Guide for Brewers

The Brewers Association is the not-for-profit trade association dedicated to small and independent American brewers, their craft beers and the community of brewing enthusiasts. The Brewers Association (BA) represents more than 70 percent of the brewing industry, and its members make more than 99 percent of the beer brewed in the U.S. The BA organizes events including the World Beer Cup┬«, Great American Beer Festival┬«, Craft Brewers Conference & BrewExpo America┬«, SAVORÔäá: An American Craft Beer & Food Experience andAmerican Craft Beer Week┬«. The BA publishes The New Brewer magazine and its Brewers Publicationsdivision is the largest publisher of contemporary and relevant brewing literature for today’s craft brewers and homebrewers.