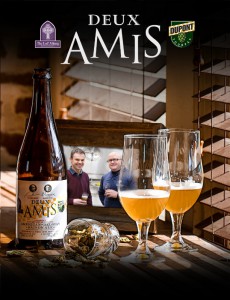 MOUNT PLEASANT, S.C. — One of the oldest and most respected producers of Belgian farmhouse ales, Brasserie Dupont, along with award winning brewery Lost Abbey, is proud to announce the release of a new collaboration, Deux Amis, in the U.S. this summer.

“I wanted to work with Tomme,” explains Dedeycker, “because I felt we had a similar love for Saisons, and with his American hops expertise, we could really create something incredible.” Tomme Arthur adds, “I fell in love with Belgian beers back in the middle 90’s and Dupont was one of those beers. The yeast character is just striking.”

Deux Amis will be available in kegs and 750 ml bottles. US Importer and Supplier, Total Beverage Solution, is proud to represent the brand in the US beverage market. Deux Amis is now available for pre-order by e-mailing BelgianExperts@TBSBrands.com.

Brasserie Dupont established as a farm brewery in 1844 in Tourpes, Belgium, is currently managed by Master Brewer Olivier Dedeycker, a fourth generation member of the Dupont family, the brewery is most well known for producing Saison Dupont Vieille Provision. Saison Dupont has been named “Best Beer in the World” and is considered the benchmark of Saisons. For more information: www.BelgianExperts.com.

Founded in 2006, Port Brewing and The Lost Abbey produce an extensive line-up of European and American inspired ales and lagers. Under the direction of visionary Brew Master and co-founder Tomme Arthur, the brewery and its beers garner dozens of awards for their complexity, unique flavors and bold boundary-pushing styles. For more information: www.LostAbbey.com.