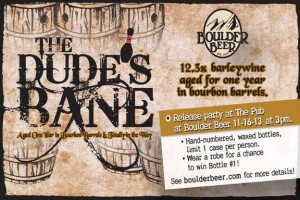 Aged for one year in first-use bourbon barrels, The Dude’s Bane is Boulder Beer’s first ever barrel-aged beer released in a bottle and their most rare packaged offering with only eight barrels in existence. It began as a lighter-bodied English-style Barleywine with undertones of candied fruit, then over time evolved into something much more complex with the fusion of bourbon, vanilla and oak flavors from the barrel.

And although totally in their Shipping Dude’s way in the cooler all year, the barrels really tied the room together

“At least now I won’t have to move these barrels around anymore,” said Steve Dunn, Shipping Dude at Boulder Beer. “Wait, what? We’re doing another round for next year?”

The Dude’s Bane release party will be held on Saturday, November 16th at 3:00pm at The Pub at Boulder Beer. The Dude’s Bane will be sold in 22-ounce bottles, exclusively at The Pub and no other retail outlet. Limit 12 bottles per person.

“All bottles will be waxed and hand numbered,” said Jamie Osborn, Pub Manager. “If you’re a collector, we recommend coming down early to get a lower numbered bottle. Then you can have a bite to eat and jump on the 2:00pm brewery tour before we start selling The Dude’s Bane bottles at 3:00pm.”

Guests should wear a bathrobe to the festivities to get entered to win Bottle #1! Games with a chance to win some other great prizes start at 3:00pm as well.

Founded in 1979, Boulder Beer Company has been a pioneer in the craft brewing industry for 34 years. Their passion for innovation keeps their brand mix diverse, offering a taste for every palate. They currently package seven year-round beers, six rotating seasonals, and periodically release very limited-edition, small-batch brews throughout the year. Hazed & Infused is currently their top-selling beer.