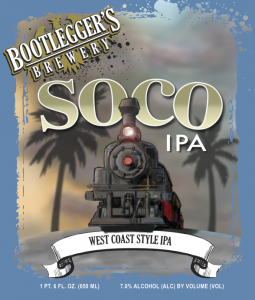 Fullerton,CA – Bootlegger’s Brewery has quite the reputation for making some of the most unique, fresh hoppy ales in Orange County California, and are proud to present our newest bottled offering, Soco IPA.

Soco IPA is our interpretation of a West Coast-Style India Pale Ale. We used generous amounts of late edition new American hops, and keep the body light and crisp so the hops are the star of the show.

Previously only a draft offering, Soco IPA will debut in bottles Friday August 1st at our tasting room in Fullerton,CA (Within the SoCo district) and will begin hitting shelves the following week where Bootlegger’s beers are sold.

Conceived: Soco IPA began as a pilot beer in our brewery and tasting room in 2010 and was such a favorite with our local customers we kept brewing it. Soco stands for South of Commonwealth, a main street that runs through our home city of Fullerton.

Stay tuned: Our famous DIPA, Knuckle Sandwich release is right around the corner as well as our Seasonal, Pumpkin Ale.

Established in 2008 by husband and wife Aaron and Patricia Barkenhagen, Bootlegger’s Brewery is one of the pioneer breweries in the emerging craft beer scene of Orange County California. Bootlegger’s makes a diverse portfolio ales and lagers with love and hard work, for the hard working man and woman. Learn more about Bootlegger’s Brewery by visiting http://bootleggersbrewery.com, and follow Bootlegger’s on Twitter, Facebook and Instagram.