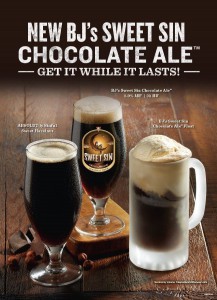 “We felt that BJ’s Sweet Sin Chocolate Ale would be the perfect beer to unveil in honor of both BJ’s 20th brewing anniversary and Valentine’s Day,” said BJ’s Senior Vice President of Brewery Operations Alex Puchner. “We are excited for beer fans and chocolate fans alike to come in and try this unique 5.9 percent ABV ale that is only available at BJ’s restaurants.”

BJ’s Sweet Sin Chocolate Ale was a sweet labor of love for BJ’s lead brewers. The team spent over two years designing and perfecting the ale, which is brewed with a combination of three dark malts, cocoa nibs, lactose sugar, natural chocolate flavoring and a touch of vanilla. Notably different from other chocolate ales on the market, BJ’s Sweet Sin Chocolate Ale gets its unique flavor by starting with a brown ale that is then brewed with real chocolate and cocoa nibs for rich chocolate flavor.