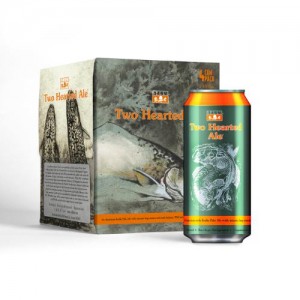 BROOMFIELD, Colo.— Since 1985, craft beer maker Bell’s Brewery, now brewing in both Kalamazoo and Comstock, Mich., has been dedicated to creating flavorful, unfiltered, quality craft beers. Due to the introduction of two of their most popular brews in 16-ounce cans from Ball Corporation (NYSE: BLL), Bell’s fans are taking Oberon Ale and Two Hearted Ale with them in cans to places they couldn’t before.

“Bell’s customers spend a lot of time outdoors,” said Laura Bell, vice president of Bell’s Brewery, Inc. “The addition of cans allows our fans to take our beer places where glass is not allowed, which is a win for everyone.”

“Craft brewers like Bell’s not only want to provide a portable package for their consumers, they also have an intense focus on quality,” said Bruce Doelling, vice president, sales, for Ball’s North American metal beverage packaging business. “And in addition to being infinitely recyclable, cans protect the beer that Bell’s brewers painstakingly create by blocking out 100 percent of light and oxygen making it the perfect package for craft beer.”

Bell’s Brewery, Inc. began in 1985 with a quest for better beer and a 15-gallon soup kettle. Since then, they’ve grown into a regional craft brewery that employs more than 200 people over a 20-state area, in addition to Puerto Rico and Washington D.C., with the ongoing goal to brew thoughtfully, creatively and artistically. Bell’s strives to bring an authentic and pleasant experience to all of its customers through Bell’s unique ales and beers. For more information, please visit bellsbeer.com.

ÔÇ¿Ball Corporation supplies innovative, sustainable packaging solutions for beverage, food and household products customers, as well as aerospace and other technologies and services primarily for the U.S. government. Ball Corporation and its subsidiaries employ 14,500 people worldwide and reported 2013 sales of $8.5 billion. For more information, visit www.ball.com, or connect with us on Facebook or Twitter.