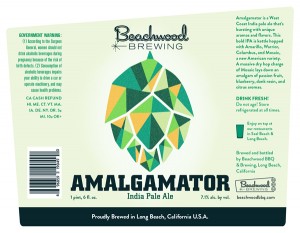 Amalgamator is a West Coast India Pale Ale that’s bursting with unique aromas and flavors. This bold IPA is kettle hopped with Amarillo, Warrior, Columbus, and Mosaic, a new American variety. The dry hop is a massive charge of Mosaic that lays down an amalgam of passion fruit, blueberry, dank resin, and citrus aromas. As Brewmaster and co-owner Julian Shrago explains, “We’re extremely excited to release another favorite Beachwood IPA.” The light base of American 2-row malt makes way for the hops to take center stage. “We brew a lot of IPAs and Amalgamator is by far my favorite,” echoes co-owner Gabriel Gordon. “It is especially aromatic and packed with flavor; I’m just super excited it finally making it to the shelves.”

Amalgamator IPA bottles will be released at both Beachwood locations on February 25th, 2014 at 5pm. Celebrate the addition of this aromatic IPA with food specials and festivities at Beachwood BBQ & Brewing in Long Beach.

Sold in 22 oz. bottles at Beachwood BBQ and Beachwood BBQ & Brewing, look for Amalgamator IPA at finer craft beer retailers across Los Angeles, Orange, and San Diego counties. The IPA will also be available on draft at both Beachwood BBQ locations.