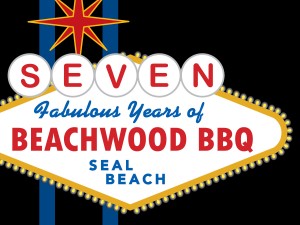 Seal Beach, CA—November 25, 2013— In celebration of Beachwood BBQ’s 7th anniversary, the Beachwood team is hosting a week-long celebration at the original Seal Beach location from December 17th to 22nd.

Feeling lucky to be celebrating 7 years, Beachwood BBQ’s anniversary week will feature a stellar line up of seasonal winter beers and pre-fixe menu items. Throughout the week, feast on Vegas buffet-themed food specials such as Oysters Rockefeller, Crusted King Crab Legs, and a mouthwatering Dessert Sampler. “We feel so fortunate to have made it seven years and are lucky to have the support of such great customers,” says Beachwood’s Owner Gabriel Gordon. “We are so excited to celebrate this milestone with our friends, family and community”.

You can find Beachwood Seven on draft and in bottles at both Beachwood BBQ locations starting December 17th. The limited-edition release will also be available at finer craft beer retailers across Los Angeles, Orange and San Diego counties.