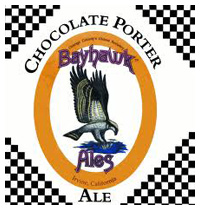 IRVINE, CA — Bayhawk Ales recently claimed a bronze medal in the 2012 World Beer Cup┬«, a global beer competition presented by the Brewers Association (BA) that evaluates beers from around the world and recognizes the most outstanding brewers and their beers.

Gold, silver and bronze awards in the competition’s 95 beer-style categories were presented May 5, 2012 during the World Beer Cup Gala Awards Dinner at the Town and Country Resort in San Diego, California.

Bayhawk Ales was awarded a bronze in the Brown Porter beer style category for its Chocolate Porter, a medium bodied yet complex that tastes of semi-sweet dark chocolate and French roasted coffee. Bayhawk Ales is a 12,000bbl Craft Brewery located in Irvine,CA USA that specializes in easy-drinking Craft beers. Bayhawk has entered this competition four times and has won three medals, including gold.