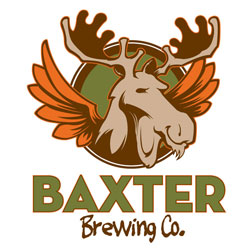 LEWISTON, ME – Baxter Brewing Company, Maine’s newest microbrewery and the only New England brewer to ship all its beer only in metal packaging (cans and kegs), announced plans today to double its current production capacity after only ninety days of operations.

“Demand has been absolutely phenomenal,” reports company founder and president, Luke Livingston, “from all corners of Maine, from restaurants, bars, beverage stores, convenience stores, grocery chains; from everyone! We are extremely gratified.”

The brewery began shipping its first two varieties of beer — Pamola Xtra Pale Ale and Stowaway IPA — just in January, 2011. The handcrafted beers ferment for a week and then are cold conditioned for two more weeks, a three week process that is longer than typical for other Maine breweries but one which produces smoother, more robust beers.

The 30 barrel brewhouse system, with two 60 barrel fermenters and two 120 barrel conditioning tanks, and the three-week cycle enables the brewery to yield just over 300 barrels (9,300 gallons or 4,200 cases) monthly.

“But demand has already exceeded our capacity,” Livingston explained, “and we’re just now coming into peak beer season in Maine.”

The addition of two more fermenting tanks and one new conditioning tank, expected to arrive in early June, will double the volume the brewery can ship each month, as well as allow the company to introduce new varieties to their lineup. Furthermore, the new tanks will result in the creation of 2.5 new full-time-equivalent jobs, bringing the total workforce to 9 (FTE).

“There’s no question this is a major capital expansion,” Livingston said, “and one we didn’t expect to undertake nearly this quickly. The fact that we’re growing so fast is something that no one could have anticipated, but it shows that we are really filling a high-demand niche. I know there were beer fans who were skeptical that we could package great beer in cans, but we seem to have satisfied their concerns, and then some!”

Although new to northern New England, canning of craft beer has been an emerging trend on the west coast and in Colorado for several years, corresponding to the introduction of micro canning equipment from Cask Brewing Systems, of Calgary, Alberta CN.

The new tanks are being acquired from Newlands Systems Inc, suppliers of the original Baxter brewhouse. Although also a Canadian company, the new fermenters are some of the first be manufactured at Newlands’ brand new American facility, located in Detroit, MI.

When asked if he thought initial demand had been enhanced by the Maine beer community’s natural interest in new locally produced craft beers along with people experimenting with a the new concept of cans, Livingston said “Probably, but what is most encouraging is that one of our distributors (Pine State Trading Company, of Gardiner, Maine, the biggest beer wholesaler in Maine) reported that 100% of those who ordered shipments from the first batch of beer, in January, re-ordered in February, and 80% of them increased the size of their orders!”

“We have some great, unique beers,” Livingston said. “People seem split down the middle in terms of preference for Pomola Xtra Pale Ale, a lighter, session beer perfect for Maine’s outdoor lifestyles, especially since it’s packaged in cans, the ultimate portable container; and Stowaway IPA, a more balanced and flavorful west-coast style IPA, unlike anything else currently brewed in Maine.”

For more information on Baxter Brewing visit their website.