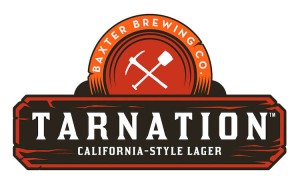 LEWISTON — AUBURN, MAINE – Baxter Brewing Company, the acclaimed all-cans craft brewery in Lewiston, Maine that was the first of its kind in New England, introduces Tarnation, a California-style lager and the newest addition to Baxter’s roster of year-‘round varieties. Brewed in the style of the “steam” beers born in 19th-century California and still popular there today, Tarnation is Baxter’s first lager. Fermented with an authentic San Francisco lager yeast, Tarnation is a crisp, clean beer that is eminently satisfying. While a “destination beer” for those visiting the west coast, the style is rare here in New England, but beginning the first week of March, Tarnation will be distributed throughout Baxter’s four-state neighborhood (Maine, New Hampshire, Vermont and Massachusetts).

“We’ve been offering a steady rotation of small-batch, specialty beers on tap only in our in-house tasting room for the past year and a half or so,” said Ben Low, Baxter’s Director of Brewing Operations, “and the recipe for Tarnation proved to be among the most popular ever. We’re really excited by the chance to bring something entirely new to our region.”

Tarnation will be added to Baxter’s new 12-can “Backpack” variety pack, along with the brewery’s other year-round varieties — Pamola Xtra Pale Ale, and Stowaway I.P.A., while Amber Road will be going back into the vault to make room. The variety packs have quickly proven to be the most popular innovation in Baxter’s three-year history. “We’ve been thrilled with how quickly our fans have adopted the Backpacks,” said Baxter’s founder and CEO, Luke Livingston. “In fact, they were our best-selling SKU in our portfolio last month, the month they debuted,” he added.

In addition to its year-round portfolio, Baxter produces three seasonal varieties each year. With spring fast approaching, New Englanders are anticipating the annual release of Summer Swelter summer ale, which will be followed as usual by Hayride Autumn Ale and Phantom Punch Winter Stout. Following the recent rapid sell-out of Baxter’s first packaged one-off variety, which celebrated the brewery’s third anniversary — On the Count of ThreeImperial Hefeweizen — Livingston and Low expect to continue introducing other new varieties. “Variety is a big part of craft beer culture,” Livingston explained, “and we are happy to be able to provide more of it.” Low added, “It’s great to have the capacity, technology, staff and distribution network that lets us experiment and keep things interesting.”

The brewery is housed in the historic Bates Mill, in Lewiston, Maine, and has become a destination for beer lovers from all 50 states, and more than three-dozen countries from all across the globe. Experimental varieties in batches too small to be packaged are offered exclusively in the Tap Room, and the lineup changes just about weekly. Named the Best New Brewery in the U.S. for 2011 by the beverage industry’s BevNET Magazine, demand for Baxter’s beers has exceeded supply since its inception, and the brewery’s recent expansion increased total capacity to more than 33,000 barrels per year. “We are committed to staying fresh, to always offering something new and fun,” Low said, and Tarnation represents the state of the brewers’ art. “This is exciting, and we can’t wait for everyone in our states to try some!”

“A series of tastings and launch parties is being planned for all four states, and Baxter continues to be active in community, social, sports and philanthropic activities from the coast of Maine, to the mountains of Vermont and New Hampshire, to Back Bay and the Cape,” Livingston added. “Coming to a bar, restaurant or retail store near you, in March!”