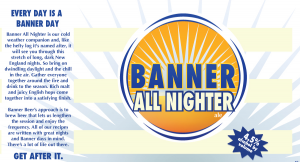 Named for the last log to be put on the fire during a cold winter night, All Nighter is an ESB style beer that has sustaining rich malt character with signature British hop notes of fruit and marmalade.

All Nighter will be available in the MA and RI markets in 12oz. cans and on draft. A nitro version will be poured at select locations.

Based in Grafton, Massachusetts, Banner Beer Company was founded by longtime Harpoon Head Brewer Todd Charbonneau. After 15 years at the largest regional brewery in New England, Todd has launched his own company dedicated to full-flavored session beer. All of their beers are 5% ABV or lower, with banner nights and clear-headed mornings in mind. In addition to seasonal brews, Banner American Ale and American Rye are available all year round in 12 oz. cans and on draft.

More than 15 years ago, Todd clipped a quote out of the Boston Globe: Find a job that you love and you’ll never work a day in your life. Taking that to heart, and realizing that his band maybe wasn’t going to be the next Husker Du after all, he walked into one of Boston’s premiere breweries and landed a job on the bottling line. He worked hard, and his dedication paid off. He studied Brewing Sciences through MBAA, and eventually was Head Brewer for the Harpoon Brewery for more than ten years. He wrote and developed recipes for Imperial IPAs, Barley Wine, & Weizenbock to name a few, and loved the hands on day-to-day challenge of making beer.

“When we were young, nothing was better than staying up all night, drinking beer, listening to music, and talking with friends. We still love all those things, but with three kids, lots of responsibility, and a newfound interest in running, we needed a beer that could accommodate our lifestyle. Typical “light” beers were utterly disappointing as far as flavor, and the craft beers we loved were too strong to enjoy in a session.

So we started Banner Beer Company. Our Company is founded on the idea that everyone can live up to their full potential and purpose every day. We can all do a little more for our health, for our minds, for our neighbors, for our world. We can work hard and have fun. We can come together and drink great beer. Banner Beer is an American Beer Company that raises a glass our country’s great spirit and diversity, and has fun doing so.”