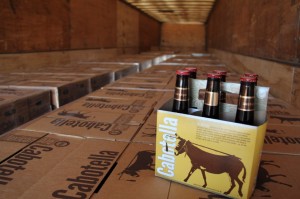 LOS CABOS, Mexico — Baja Brewing Company, the original craft brewery in the Mexican state of Baja California Sur, has announced that its flagship beer, Cabotella (CAH-bo-TAY-uh), is now available in California. With this expansion, Cabotella can be found in five states in the U.S. Southwest — Arizona, California, Colorado, New Mexico and Texas.

Distributed by Southern Wine and Spirits of California, the Mexican ale will be available in restaurants, bars and retail stores throughout the state. The most up-to-date listing of accounts can be found here: http://www.cabotella.com/where-to-buy

“We started exporting Cabotella in 2012 to share it with our friends and family back home in Colorado, so they could experience a little bit of Cabo,” said Jordan Gardenhire, co-founder and brewmaster, Baja Brewing Company. “It’s really exciting for us to see how the beer has grown and gained fans throughout the Southwest. The next logical step was to enter California, a great market for Mexican craft beer, and Southern Wine and Spirits of California is the perfect partner for this expansion.”

The recipe for the blonde ale, made from all-natural ingredients and boasting a refreshing, yet rich flavor, was formulated using feedback from patrons at Baja Brewing Company’s three brewpubs in the Los Cabos area. The result is an authentic Mexican ale inspired by Colorado craft brewing and the laid back spirit of Cabo.

“Baja Brewing Company is unique — an independently owned craft brewery based in Mexico making great beer that appeals to Mexican beer drinkers on both sides of the border,” said Tim Hirota Director of the Artisanal Group, Southern Wine and Spirits of California. “We’re thrilled to be working with them to bring Cabotella to California. It’s a great addition to our portfolio.”

Founded in 2007 by Jordan Gardenhire, Charlie Gardenhire and Rob Kelly, Baja Brewing Company is the first brewery in the Mexican state of Baja California Sur. From the start, the mission was to bring a craft brewing culture to Mexico similar to that in Colorado, where Jordan, Baja Brewing Company’s brewmaster, first began brewing beer at the University of Colorado, Boulder.