Initially launched last May, the “Uprising! Series,” was originally intended to feature 3 hop-forward double IPAs. Each of the beers showcased hard to find hop varieties such as Amarillo, Mosaic and Galaxy. 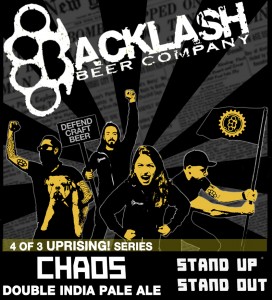 “Catalyst, Outbreak, and Riot were three of our best beers, and we really loved the series as a whole,” Backlash founder and president Helder Pimentel wrote on the company’s blog. “Featuring some of the most popular hops we could get our hands on was not only fun, but also educational for everyone who wanted to learn how individual varieties of hops compare to one another.”

Chaos, the fourth and final addition to the Uprising! Series, will share the same malt backbone as the previous releases but will also include each hop variety that was showcased in the Catalyst, Outbreak and Riot beers.

“We’re actually cheating a bit on this one and including hops from Salute as well,” said Pimentel.

Chaos will feature the following hops:

“This beer was designed to be over the top in aroma and flavor. Combining our learnings about each individual hop variety allows us to get the most of each one and really makes Chaos something special”, Pimentel added.

Chaos is 8.5 percent ABV and about 75 IBUs, which, like all of Uprising! Series beers, are deceptively, smooth.

The beer will be available in limited supply in both 22oz bottles and on draft in the greater Boston area. Smaller amounts will find its way to other parts of Massachusetts. A suggested retail price of $7.99-$8.99 is in-line with other Backlash Beer offerings.

Backlash Beer Co. beers are distributed by the Massachusetts Beverage Alliance. For more information about the Uprising! Series or other Backlash offerings, please contact maggie@backlashbeer.com or brian.murphy@massbevalliance.com.

Founded in July 2011, Backlash makes beer the way it was intended: flavorful, gimmick-free, and not produced in ridiculous quantities. While brewed contract out of Paper City in Holyoke, the Backlash crew can more often be found near their headquarters in Boston, MA. Stand up and reclaim beer — join the backlash.