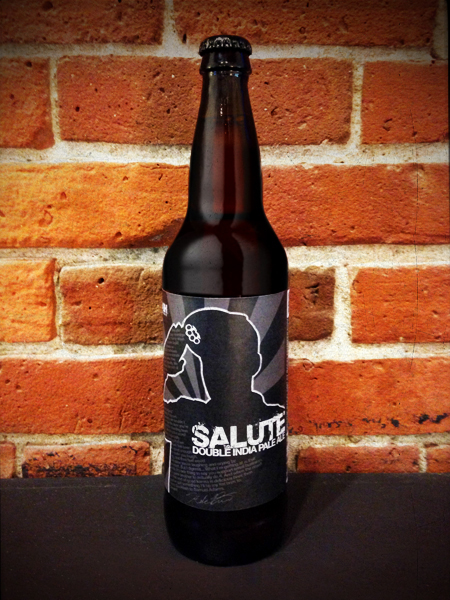 BOSTON — Backlash Beer Company is excited to announce the release of its first American-style beer, Salute, a West Coast-style, double IPA brewed with Citra and Simcoe hops sourced from the Boston Beer Company.

In June of 2012, Jim Koch, the founder of Boston Beer Company, announced that he’d be sharing 30,000 lbs. of specialty hops through a ‘Hops Sharing Program’ designed to assist small brewers who were struggling to secure hard-to-find hop varieties. After hearing the news, Backlash applied to the program and was notified at the end of 2012 that it had been selected to receive a limited quantity of Simcoe and Citra hops.

“Being able to brew this style, using these incredibly hard to find hops, is really exciting,” said Backlash founder Helder Pimentel. “Without the Hop Sharing Program we wouldn’t have access to these hop varietals and this beer simply wouldn’t exist.”

“I contemplated using the hops in a more economical way — rationing them throughout the course of 2013 — but I really wanted to make an over the top, hop-forward beer,” he said. “The nose on Salute is incredibly tropical with hints of pine and dankness that drinkers will smell as soon as they open a bottle. Waves of soft tropical fruit and mild pine signify the distinct, West Coast flavor profile I was after.”

Both the name of the beer and the label itself — which depicts an outline of Pimentel saluting Koch — serves as a tribute to the maker of Samuel Adams.

“It’s one thing to say you support small business, but to actually do it through things like the Hops Sharing Program is really special,” said Pimentel. “I felt it was my responsibility to take those hops and make the best beer I possibly could with them. I’m thrilled with how this beer turned out.”

Salute checks in at 8.5 percent ABV and just shy of 100 IBUs, but the bitterness is noticeably smooth. A limited supply of the beer will be made available in 22 oz. bottles and on draft throughout the greater Boston area and parts of the North Shore. A suggested retail price of $7.99-$8.99 is in-line with other Backlash Beer offerings like its Belgian IPA, Declaration.

Additional batches of Salute will be brewed in an effort to offer more widespread distribution across remaining areas of Massachusetts. For more information, please contact maggie@backlashbeer.com or brian.murphy@massbevalliance.com.