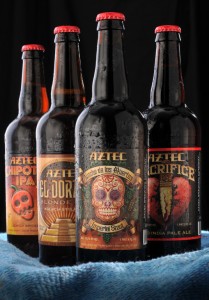 VISTA, CA — In 1921 three San Diego businessmen founded the original Aztec Brewing Company brewery in Mexicali, Mexico. Aztec moved North to San Diego after the repeal of Prohibition where it became a substantial regional brewery until it was purchased by the Altes BrewingÔÇêCompany in the late 1940’s and the brand was retired.

In 2011 the revived Aztec Brewing Company opened in San Diego County and this month it’s beer will make a triumphant return to it’s country of origin when it ships beer South to Mexico.

“We are very excited to be expanding our portfolio into Mexico,” said James Valles Sales Director for Aztec Brewing Company. “Because of the high demand for quality craft beer, strong craft beer trends and the natural association our brands have with Mexico, we felt the timing was right to enter the market.”

“Initially, our brands will be available within the BeerBox chain which operates a Pub/Retail Store concept from Baja California to Cancun, which allows the consumer to sample brands before purchasing. This is a concept we embrace and we are confident that once they taste the quality of our brands they will purchase for their homes on a regular basis.”

Valles went on to say, “BeerBox has put together a great marketing plan which focuses on in-house promotions and an aggressive direct to consumer strategy. This will put our brands into hands of thousands of consumers in key markets throughout Mexico.”

Since 2007 BeerBox has offered great beers from around the world and now has over 40 Pub/Retail locations throughout Mexico. http://thebeerbox.mx