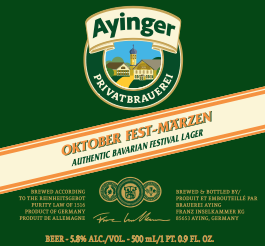 Seattle, WA — Ayinger Oktober Fest-M├ñrzen, one of the most highly-respected m├ñrzens available in the world (and currently the top-rated Oktoberfest/M├ñrzen at ratebeer.com) is arriving now at a store, bar or restaurant near you.

Ayinger Brewery, founded in 1878 and located in the Bavarian village of Aying – about 30 minutes from Munich – has earned a reputation for beer of the highest quality. Ayinger always represents a commitment to excellence, which shows up at the World Beer Championships (where Ayinger often takes first place in every category entered), or on beer websites, or in the delightful Ayinger beer quaffed at your local pub, or even in a discussion between other German brewers.

Oktober Fest-M├ñrzen is an honest m├ñrzen – full-bodied, rich lager with a malty bouquet and richness that stops short of sweetness. Color is deep amber-gold and the flavor is a perfect balance: malt backbone with depth & richness; complemented by perfect conditioning from long maturation; and alcohol of 5.8% by volume. Fest-M├ñrzen is spiced with enough hops to make it snappy and thirst-quenching, but in the classic Bavarian style it’s not highly bitter. Ayinger Oktober Fest-M├ñrzen shows big bold flavors and clean purity while still maintaining perfect balance: we’ve never tasted any fall beer that can surpass it in comparison. But don’t just take our word for it – try some yourself. Just remember, Oktober Fest-M├ñrzen is seasonal . . . so get it while you can, or you may have to wait until next year.

(The deep maltiness of OFM comes in part from decoction mashing, a time- and equipment-intensive process that is not common outside Germany and the Czech Republic.) Sold in traditional half-liter bottles (16.9 oz. – packed 20 per case) as well as 30-liter kegs.

A bit of history: Munich’s Oktoberfest began in 1810 when Princess Theresa married Prince Ludwig. The party lasted for days, and was such a success that it has become an annual 16-day celebration in Munich as well as in many other parts of the world. (To determine the start date of Oktoberfest, count backward 16 days from the first Sunday in October. In 2014, it starts on Saturday, September 20.)

Merchant du Vin imports Samuel Smith’s from England; Traquair House from Scotland; Ayinger and the organic beers of Pinkus from Germany. Our offerings from Belgium include Lindemans lambics, Green’s gluten-free beers, Du Bocq and the Trappist beers of Orval, Westmalle and Rochefort.

Data Roundup: BPI Shows Persistent Out of Stocks; US Brewers...

Last Call: GoPuff Funding Round Nets $1B; Kingfisher Maker U...