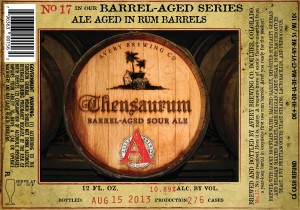 Boulder, CO —Sometimes your most valued treasures reveal themselves only after being long forgotten and sometimes to discover their beauty you must break down your preconceived notions. Such is the case with Thensaurum, a 10.89% ABV, rum barrel-aged sour that is No. 17 in Avery Brewing Company’s Barrel-Aged Series.

“To me Thensaurum proves you always have something to learn,” said Parker, Avery’s Chief Barrel Herder. “When I walked into the weekly tasting panel with this beer everyone said ‘Wait, what beer is this again?’ Even Adam had forgotten about Thensaurum and it was his idea. After they tasted it all I heard was ‘Whoa! When are we packaging? That’s awesome.’ No one could believe how well it had turned out, especially me. I had been against the concept from the start. The combination of flavors seemed all wrong. As it turned out it was me who was wrong. This beer blew me away.”

“This was a total experiment,” said Adam Avery, the brewery’s founder. “We love these particular rum barrels and I thought we should try something new with them. One thing the years have taught us is that taking chances on new things really pays off.”

As for his favorite attributes of the beer, Adam notes, “It’s like a rum cocktail. Rum cocktails usually have lime, a citric acid aspect, to them. With Thensaurum the barrel and malts shine through in the rich aroma, but the beer drinks dry, acidic and super clean. It’s a crazy dichotomy.”

Parker adds that he loves the aromas put off by the Brettanomyces yeast in Thensaurum. “the secondary fermentation from the Bretts created incredible aromas of pineapple and tropical fruit.. There’s almost none of those horse blanket and barnyard notes that can be associated with wild yeast.”

Only 276 cases of Thensaurum were produced. The Avery Tap Room in Boulder, CO, will host the release of Thensaurum, starting sales at 5pm on Sunday, August 25th, 2013. Bottles are 12oz. and will be sold as singles at $10 each. Fans will be able to buy up to 12 bottles, and availability can only be guaranteed at the Avery Tap Room during the release party until the beer runs out. The line party will start at 11am and will feature rare beers and Tap Room exclusives. For more information, beer connoisseurs can check www.averybrewing.com or email info@averybrewing.com.