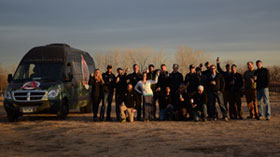 BOULDER, CO – Marking a milestone in their new brewing facility, father and son Larry and Adam Avery closed on a 5.6 acre parcel in the brewery’s hometown of Boulder, CO.

Overlooking the Twin Lakes Open Space park with a view of Boulder’s iconic Flatirons, the property marks the future location of Avery Brewing Company. Along with a state-of-the-art brewery to handle Avery’s wholesale beer production, the project will also be a craft beer destination for locals and tourists alike, featuring the Avery Tap Room and restaurant, an aerial walkway for self-guided tours, and a retail merchandise shop. Avery staff cheered the occasion with a mass toast with 12 oz cans of their flagship India Pale Ale.

Adam Avery said of the moment, “We have some time to go before calling the movers, but after nearly 20 years of brewing in our mish-mash of nonadjacent warehouses and trailers, it feels awesome to get to this point.” The brewery currently employs 80 people, and expects the number to grow with the coming expansion. Slated for completion in 2014, the new facility will offer 75,000 square feet of production and warehouse space with a 120 bbl brewhouse, and an immediate capacity of 120,000 bbls per year with an eventual capacity of 350,000 bbls per year.