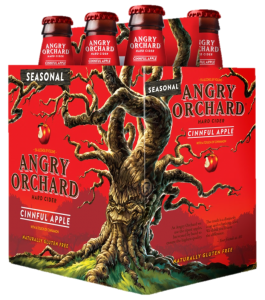 CINCINNATI, Ohio — Hard cider is exploding in popularity in the U.S., and with this renewed interest drinkers are trying different styles of cider and new flavor profiles. Inspired by this sense of exploration as well as the spicy kick of cinnamon, the cider makers at Angry Orchard have crafted a new innovative fall and winter seasonal cider— Angry Orchard Cinnful Apple.

Angry Orchard Cinnful Apple imparts a sweet, slightly tart apple flavor, balanced with the aroma of cinnamon spice. This seasonal cider is refreshing and smooth yet warming, the perfect complement to the colder months ahead. The spicy flavor profile of Angry Orchard Cinnful Apple also pairs exceptionally well with fall holiday drinking occasions and a variety of food.

Angry Orchard hard cider is a quality hard cider, born of many years of experimentation. The cider makers at Angry Orchard have experimented with apple varieties from Europe, looking for the best fit for each cider. Cider recipes within its Core Collection and Cider House Collection blend apples from European orchards— where apples ideal for cider have been cultivated for centuries or bred unique to cider making.

Cinnful Apple, a limited seasonal release, is Angry Orchard’s first cider made with American culinary apples. Certain regions within the United States, such as the Pacific Northwest and foothills of the Northeast, share characteristics with the apple growing regions of France and Italy in their rich soil and ample sunshine. The cider makers at Angry Orchard found that the sweet, juicy profile of apples from Washington state complemented the spicy heat of cinnamon, to create a unique and balanced flavor profile for Cinnful Apple.