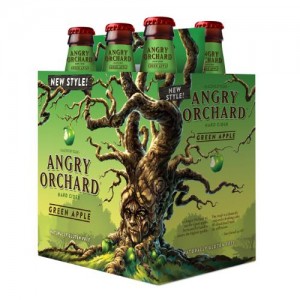 The cider makers at Angry Orchard have experimented with different apple varieties and fermentation methods for more than 15 years, looking to perfect the craft of cider making. In creating Green Apple, they found that the sweet, juicy profile of culinary apples from the Pacific Northwest, specifically Washington State, lends to a perfect fresh apple flavor and sharp apple tartness. When creating Green Apple, the cider makers at Angry Orchard looked to achieve the familiar characteristics of a green apple, which is typically more acidic with an uncommon tartness compared to traditional red apples.

“With its bright, fresh apple aroma and notes of honeydew melon and kiwi, Angry Orchard Green Apple is a refreshing and complex cider balanced by tartness characteristic of green apples,” notes David Sipes, cider maker for Angry Orchard. “For Green Apple, we explored apples from a few different regions but we were ultimately inspired by the flavors found in culinary apples grown in Washington State. These apple varietals boast a fresh apple flavor balanced by unmistakable apple tartness, perfect for our Green Apple hard cider.”

In 2012, Angry Orchard Cider Company launched three hard cider styles nationally, Crisp Apple, Apple Ginger and Traditional Dry, and has quickly become a favorite among drinkers as a crisp and refreshing flavorful hard cider made with quality ingredients. The cider makers at Angry Orchard experimented for years with apple varieties from Europe, specifically orchards in Italy, where culinary apples are unique to the terroir, and in France, where bittersweet apples unique to cider making have been cultivated for centuries.

Certain regions within the United States, such as the Pacific Northwest and the Northeast, share characteristics — rich soil, ample sunshine and water — with the apple-growing regions of France and Italy that are known to produce apples conducive to cider making. The cider makers at Angry Orchard found that slightly less tannic juice from culinary apples from Washington State in harmony with the fermentation process created the perfect aroma, body and flavor for Green Apple. American culinary apples also contributed to the creation of limited release hard cider seasonal styles, Angry Orchard Cinnful Apple and Elderflower.

About Angry Orchard Hard Ciders made with American Apples:

Angry Orchard Cider Company’s cider makers have been experimenting with apple varieties and unique flavors to develop cider recipes for almost 20 years. Angry Orchard’s hard cider line-up — Crisp Apple, Apple Ginger, Traditional Dry, Elderflower, Iceman and Strawman — first experimented with a blend of Italian culinary apples from the foothills of the Alps and French bittersweet apples from Normandy. Year-round style Green Apple and seasonals, Elderflower and Cinnful Apple, are made with apples from the Pacific Northwest. The apple juice goes through a lengthy fermentation process, with some ciders aged on oak for additional complexity and balance, before bottling.

Starting February 2014, Angry Orchard is switching the caps on all 12oz bottles of Angry Orchard from twist-off to pry-off caps in order to improve the fresh apple flavor of all its hard ciders. Although it’s a small change, using pry-off caps will protect the cider and ensure that drinkers are enjoying the best tasting Angry Orchard hard cider possible. The cider makers have found that pry-off caps provide the most secure seal for hard cider — protecting the liquid from coming into contact with oxygen, which over time can be detrimental to the flavor of hard cider. Bottles with the new caps started hitting shelves on Feb 1, so drinkers will now use a bottle opener to enjoy their Angry Orchard hard cider. To let drinkers know about the change, all new caps will have the words “use bottle opener” printed on them. Angry Orchard makes its hard ciders with the best apples and ingredients and wants to make sure drinkers taste the hard work and the passion the cider makers have for cider making, every time drinkers open a bottle.