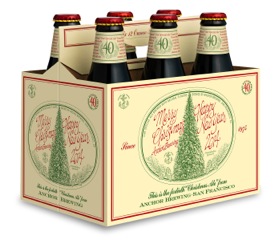 Sold only from early November to mid-January, Christmas Ale’s recipe is different every year, as is the tree on the label, but the intent with which Anchor offers it remains the same: joy and celebration of the newness of life.

“Every year we’ve changed our Christmas Ale. It hasn’t just been for change’s sake, though,” said Mark Carpenter, Brewmaster at Anchor Brewing Company. “For the past few years we’ve evolved the recipe to perfect a particular style of dark spiced ale and I believe we succeeded. So this year we went on a different path, exploring new possibilities and making larger changes. I’m happy to say we’re very pleased with the results. This year’s ale is aromatic with hints of citrus fruit, spices, and subtle piney hop notes. The flavor has a sarsaparilla-like sweetness with rich caramel maltiness and a pleasantly balanced back-end bitterness. The mouth feel is smooth with a full, velvety texture. The beer pairs well with rich meats, thick saucy dishes, roasted vegetables, and even your aunt’s fruitcake! We’re happy with this year’s Christmas Ale and while I don’t yet know where we’ll take it next year, we’ll continue to keep Anchor fans guessing as we do every year.”

Since ancient times, trees have symbolized the winter solstice when the earth, with its seasons, appears born anew. The tree depicted on the 2014 Christmas Ale is the Giant Sequoia. It was hand-drawn by James Stitt, who has been creating Christmas Ale labels since 1975, to look as a “Big Tree” planted in 1975 might look today.

Anchor Brewing chose the Giant Sequoia for the 40th annual Christmas Ale in celebration of the 150th anniversary of the Yosemite Act. Signed into law by President Lincoln during the Civil War, it granted the Yosemite Valley and the Mariposa Big Tree Grove to the State of California “for public use, resorts, and recreation.” The first such land grant in American history, it marked the beginning of the California State Parks.

In the spirit of sustainability, Anchor Brewing has also partnered with The Living Christmas Company; an environmentally conscious Christmas tree rental service that strives to change the way California celebrates Christmas. From November through December, The Living Christmas Company and Anchor Brewing Company will erect festive, live tree and beer displays at more than 100 locations across California. The partnership aims to draw awareness for the release of the 40th annual Christmas Ale as well as inform holiday shoppers of the benefits of “thinking green” when it comes to purchasing Christmas trees this season.

Christmas Ale is a traditional “Wassail” of medieval England. In the olden days, brewers often used delicious blends of natural spices to give their Christmas ale a distinctive character. Similarly brewed, the Anchor Christmas Ale recipe remains a closely guarded secret every year. It’s always brewed using malted barley, fresh whole hops, and a true “top-fermenting” yeast. Its deep, rich color is produced by using a blend of roasted malts, carefully selected to achieve not only the deep color of this ale, but also to provide much of its distinctive malty flavor. The whole-cone hops provide a balanced back-end bitterness and subtle piney hop aroma. This is accompanied with aromas of citrus fruit and herbal spices.

Christmas Ale is available in 6-packs, on draught in select bars and restaurants including the Anchor Brewing Taproom in San Francisco, and in impressive gold-foiled magnum bottles.