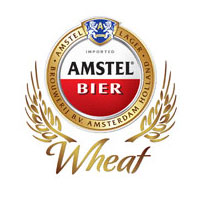 WHITE PLAINS, N.Y. – Today Amstel Light, a leading imported light beer from Amsterdam, officially announced that Amstel Wheat Bier, a pure hefeweizen, is now available in bottles in select markets in the U.S. After launching in draught in seven markets in September 2011, fans of the beer will now be able to find Amstel Wheat on the shelves of their local retailers in the Northeast region, Chicago and Minneapolis.

Amstel Wheat is pure hefeweizen brewed with Amstel’s signature craftsmanship and a brewing tradition that began over 140 years ago. Hefeweizen is a classic, European specialty beer style comprised of a portion of at least 50% wheat malt, barley malt, Weizen yeast, water, Saaz hops and nothing else. Like a pure hefeweizen, Amstel Wheat gets it’s smooth and crisp taste naturally through hops as opposed to additives.

“After positive feedback from our fans who were able to experience Amstel Wheat in draught in the last year, Amstel decided to bring Amstel Wheat to bottles,” said Yonathan Bendesky, Brand Manager, Amstel Light. “We were truly proud to produce this pure hefeweizen, one without additives or flavoring, which makes this beer style stand apart from its Belgian and American counterparts. This brew is approachable with high level of complexity with different fruit and floral notes from what’s out there now.”

Staying true to the identity of a pure hefeweizen, Amstel Wheat is low in hop bitterness with 10.7 IBUs, falling right in the traditional hefeweizen International Bitterness Unit (IBU) range of 8-15 IBU’s. It is soft on the palate with fruity and floral notes balanced by faintly hoppy undertones and does not carry heavy banana and clove flavors like its German cousins. Amstel Wheat is deep golden with amber hues and is translucent and cloudy, which stems from traditional top fermentation and unfiltered brewing method.

Amstel Wheat 12 ounce bottles will be available in 6 and 12 packs in select retail locations.

Amstel, the premium Dutch beer brand was founded in 1870 in Amsterdam, Holland by two businessmen, DePester and J.H. van Marwijk Kooy. In 1872 the first barrels of Amstel beer were delivered in Amsterdam and due to its characterful taste it became an overnight success. By 1886, Amstel had become Amsterdam’s largest brewer of lager beer and in 1968, Amstel joined forces with Heineken International. In 1982, Amstel Light was born as an import to the U.S. and is currently a leading imported light beer. Today, Amstel is one of the world’s top five international beer brands thanks to its unique portfolio, character, flavor and more than 140 years of brewing heritage. HEINEKEN USA currently distributes Amstel Light, and introduced Amstel Wheat in select U.S. markets in 2011. For more information, please visit www.amstellight.com.